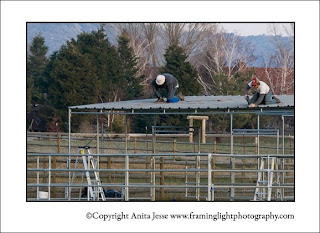 We were tremendously disappointed when we had to abandon our plans for a barn. From the beginning, The Husband and I had our hearts set on something smallish and modest, but we knew how we wanted it to look and it was to have been an important part of our new home. The downturn in real estate put that dream to rest. We are keeping it in perspective. As losses go, it may smart; but, it doesn’t rank very high.

Still, we knew it would be necessary to build some type of structure that would provide shelter for the horses. Yes, horses survive in the wild without protection from the weather, but these two guys have lived with shelter all their lives and it’s late in their lives to change that now. I think that I have already mentioned that they will have what is called a mare motel. (They are both geldings—do you think they will mind?)

I haven’t been up to hobbling around with the camera for the last several days, but I managed the snapshot above that demonstrates how far along things are. When it’s done the structure will have walls (on three sides, I think) in addition to the roof. They will get protection from rain and snow in winter, as well as some defense against the wind and some relief from the sun in the summer.

They probably won’t spend much time in their motel. They would much rather be wandering around in one of their two pastures nibbling on grass or leaning against the fence. Horses lean against fences because they know that eventually they can destroy the fence by doing that, and remember the grass is always greener on the other side of the fence. But, the best part is that leaning against fences costs horse-owners money, and if there is way to cost you more money a horse will find it. That’s just how horses’ minds work.

According to the schedule, Lancer and Night will finally be here tomorrow. For them, the transition from Los Angeles to our property in Bear Valley Springs has been a long drawn-out process. It will be nice to be greeted in the morning by not only the sunrise, but the two money-pits, as well.
Posted by Anita Jesse at Friday, March 13, 2009