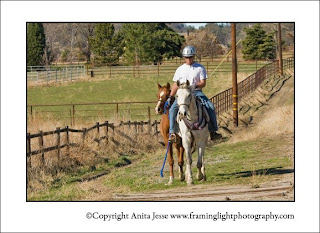 By the end of a long day yesterday, the mare motel and the fence were functional. The gates were balanced, hay was in place and all we needed was horses. This morning, The Husband hitched up the trailer and drove over to pick up our guys. It was finally time to set them up in their new home. Upon arrival at the place where they were being boarded, he learned that Lancer and Night had had one last adventure in their temporary quarters. They had managed to push down some fencing, yesterday, (did I tell you?!) and free themselves to roam. The fence they took down was an interior, not exterior, one, and that was fortunate. At least, they were not able to get out on Cumberland Road and cause a major stir. They did create a bit of havoc, however.

It seems that the folks there have a gelding who never has bought that business of no longer being a stallion. Yes, it happens. (Paul L., re. your comment a couple of days ago: take note.) The slow-to-get-it gelding has a herd of mares, and he guards and manages them as would any self-respecting stallion. Of course, Lancer and Night thought it a capital idea to race up and down the fence surrounding the would-be stallion’s pasture harassing him and his mares. It must have been quite a scene. Since Lancer has a badge of courage in the form of an impressive bite on his back, we assume that he got it during the fracas. Night, on the other hand, walked away from the mischief unscathed.

At any rate, they are now on our property munching away at their hay. We’ll see how long it takes these two to find new mischief.
Posted by Anita Jesse at Sunday, March 15, 2009