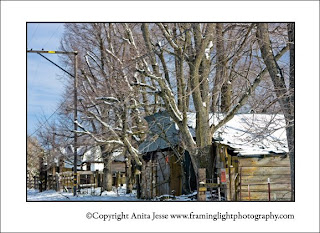 Recently, Bob Wong asked if I would share a few thoughts about what I have dubbed drive-by photography. Unfortunately, Bob, I’m not your go-to person for technique. But, I’m willing to share further thoughts about my quirky habit.

The first time I started shooting through the windshield, then sticking my head and camera outside the window of the vehicle in which we were traveling, The Husband was incredulous. “What are you doing?”, he asked (the tone of voice said it all). I told him that I was preparing to enter the aerial photography field. He just chuckled and shook his head. In case you have the same reaction, I do have some reasons for this behavior: a. I love taking pictures; b. it helps me practice basic skills without interference from that nasty inner critic; and c. It is a better way to spend travel time than playing the license plate game.

Not surprisingly, most of the shots I take from the car end up in cyberspace. The point of shooting from a moving vehicle was never about making the best possible landscape pictures. (I have my eccentricities, but I’m not that far out there.) I use the time to acquire a better command of camera controls and train my eye to more quickly recognize pleasing compositions.
Partly as a result of starting to squander all those pixels a couple of years ago, I acquired the confidence to shoot in Manual mode. To most people that may not sound like much of an accomplishment; however, in the beginning, I was totally intimidated by that much responsibility for setting exposure. As a relative newcomer to photography, I have too-fresh memories of shooting exclusively in the Auto mode. Later, I continued to use the drive-by sessions for the exploration of other camera functions, including Canon’s focus tracking mode, (AI Servo) and the A-DEP mode.

Those sessions worked for me, because they freed me to step outside my comfort zones. For instance, I couldn’t take a lot of time to think about a shot. The moments were flying by and the circumstances forced me to quickly commit to choices. From the beginning, I had the sense to pursue these exercises with minimal expectations of keepers and all that experimenting, then deleting, toughened me a bit to see shots that didn’t work as just part of the learning process, rather than failures. Early on, I learned that the more I invested in a shot, the more the disappointments hurt. Sometimes the pain would be enough to temporarily shut me down. In other words, after viewing my results, I would put the camera down for a while and fritter away valuable time while my wounds healed. By shooting wild and loose, on the fly, I tricked myself into exploration rather than chasing success.

When I was shooting through the windshield or hanging partly outside the window, it didn’t matter so much if I stank at framing. It was okay to blow it on the exposure. It was no big surprise if I set the shutter speed too slow and the shot was a mess of a blur. I could experiment and toss the results with wild abandon. When shooting from the passenger seat, I wasn’t taking pictures; I was playing. Later, I could get more serious about shooting.

Clearly, I’m not saying that my approach is right for everyone, but it was beneficial to me. I needed a means of dealing with my personal blocks, and this was one of the things that helped me. (I wish I could say that I had totally stifled the voice of that inner critic, but I can only plug away at it.) The bonus of this playing is that, periodically, I am surprised by a shot that I like quite a lot. (Even a blind squirrel finds a nut once in a while, right?) Occasionally, a shot serves primarily as a reminder of a location that I want to revisit and photograph under better circumstances. (The photo above falls in that category.) More often, even the best of the losers are nothing more than pleasant little reminders of the scenery we have enjoyed while traveling. Still, even that is not entirely worthless.

Since I use drive-by photography for experimenting or playing, I don’t have any rules, but these are my general guidelines:

1. I only shoot when I am the passenger. Come to think of it, that one is a rule for me. I know some photographers shoot from the driver’s seat, but I know my limits, too well.

2. I always remind myself that I will discard most of what I shoot from a moving vehicle.

3. I frequently shoot through the front windshield. (This is a great motivation for keeping that windshield clean.) Yes, the windshield is another contributor to degraded image quality. But, shooting out the side window means you have to be more careful to avoid anything close to the vehicle. Even at high shutter speeds, you risk getting shots that are a partially blurred mess. (That being said, if you like the blur effect, you can have a blast shooting this way. On a couple of occasions, I played with this and got some fun pictures not to mention some great material for backgrounds.

So, there you have the confessions of a drive-by photographer. A woman who unashamedly squanders pixels and abuses digital shutter releases to selfishly shoot experimental photos destined for destruction. Just one more sad, but true story.
Posted by Anita Jesse at Thursday, March 12, 2009