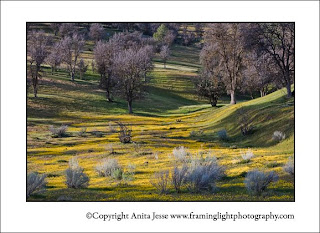 (Click on the thumbnail for the bigger, better version)
Yesterday, The Husband offered to take me for an outing. By Saturday, my left foot had only two-and-a-half purple toes, rather than four. Moreover, I had reached the point of gingerly picking my way about for a few steps in one direction or another, using the walker only when I felt the need for additional stability.

Of course, I was elated at the idea of seeing something outside our house. In three weeks, I had developed quite a case of cabin-fever. Since The Husband loves to take drives and explore back roads, I was happy to let him decide on our route and just be along for the ride. As usual, the Sherpa knows. He elected to head West on the 58, then north off the freeway to Caliente Creek Road. I knew I would enjoy the drive regardless of what we saw, but I was especially eager because our route would drop us just enough in elevation to mean some different vegetation.

What I hadn’t planned on was a dizzying variety of gorgeous trees (some already in full foliage), steep canyon walls, and stunning wildflowers. It was an intoxicating preview of what we will see here in a few short weeks. I am completely smitten. This is another of those occasions when I wish I were 6’3”, the size of an NFL linebacker, and capable of a nasty snarl (and worse) that would make people think twice about messing with me. Instead, I am a puny, 5’3”, little old lady who wouldn’t scare a rabbit. If I were that linebacker-type character, I would take off on my own and be back in that mostly wild canyon exploring every two or three days. I would love to make the canyon my SoFoBoMo project.

What added to the fun yesterday was that a couple of times I was able to get out of the car where we parked beside the narrow road and take a few steps in one direction or another. I have reached the point where I trust the ankle wrap to hold my foot and ankle steady for short trips. The right foot is messed up, but not nearly so badly, and it felt reasonably secure in some lace-up boots. By picking my way carefully one step at a time, I avoided inflicting any new damage and had a marvelous time shooting—even if I could not do any climbing about, crouching, or belly shots.
Posted by Anita Jesse at Monday, March 30, 2009