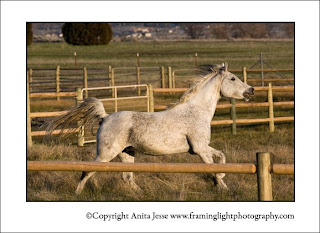 (Click on the thumbnail for the bigger, better version)
Yesterday, The Husband took some play-time for himself and took Lancer out for a ride. We both knew there would be some fireworks, but we didn’t know how much. To begin with, Lancer hadn’t had a saddle on him in a couple of months and the Arabian racing blood coursing through those veins makes itself evident on a regular basis. The second consideration takes us back to the basic fact that horses are herd animals and the longer members of a herd are together without separation, the more dependent they become on that herd for a sense of safety. Since The Husband has been completely occupied with helping to install fencing, putting up the mare motel, doing the farrier duties, etc., he hasn’t been able to ride much. Consequently, Lancer and Night have been pastured together for over a year now and rarely separated even for brief periods.

Lancer was fine it turns out and, according to reports, on his best behavior. Night, on the other hand, went berserk as Jim and his buddy rode off leaving him behind. It was a great show, but I will admit that a couple of times, I was bit concerned for his safety. Of course, he survived the trauma, but when Jim and Lancer returned, it was Night who was all lathered up.
Posted by Anita Jesse at Tuesday, March 31, 2009