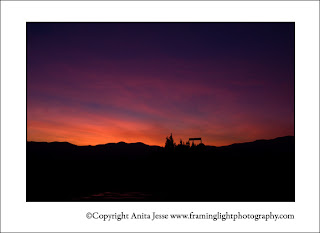 (Click on the thumbnail for the bigger, better version)
Yesterday, Paul Lester shared an experience that triggered a memory. A few months ago, we had one of those long days driving to Los Angeles and back. One of the errands was picking up the last vehicle that had been left at a repair shop in LA. That meant that, during the drive home, rather than being in the passenger seat free to indulge in my drive-by photography, I would be behind the wheel and forced to keep my attention on traffic and the road. By the time we got on the road, the sun was low, and it was obvious that we would see a spectacular sunset. Sure enough, a phenomenal light show ensued. This was one of those that wasn’t just a striking sunset. It was a 360 degree light extravaganza. It just kept getting better with every passing minute. I was in serious emotional distress. I desperately wanted to be outside my car with my camera.

The Husband was driving the ‘76 Scout that we had picked up from the shop, late that afternoon, and, in both our minds, there lingered questions about that vehicle’s total reliability. (Indeed, it was ultimately headed for another pit stop with a mechanic closer to Bear Valley Springs who specializes in Scouts.) We both wanted to end the drive and be safely home with the all the questions behind us. As we sailed along the crowded freeway, I knew it wasn’t a good idea to call The Husband on his cell requesting a detour for photographing the gorgeous colors and breathtaking light. He is amazingly indulgent and supportive of my obsession; still, he occasionally puts common sense ahead of photo ops. Go figure.

That put me in an odd position. On one hand, I was fervently hoping nothing would go wrong, the Scout would prove sound, and we would soon have a somewhat nerve-frazzling trip behind us. On the other hand, I desperately wanted to stop and get at least one shot. I toyed with the notion of concocting the need for a bathroom stop at the first service station out there in the desert. That wouldn’t have worked—he would have had one look at the camera in my hand and easily seen through my ruse. While I tried to come up with a convincing reason to stop, The Husband called me.

One of the reasons for our uncertainty over the Scout was the recent discovery that the old gas gauge was less than reliable and the call was an announcement that we would be exiting the freeway for a fuel stop. Yippee! Never mind that it was bitter cold by that time and the wind was howling, I was elated. We pulled off the freeway making our way to the service station, and I began scouting for my best vantage point. (This display was still good for about 180 degrees.) The moment my wheels rolled to a stop at the station, I jumped out of my car and hot-footed it to a spot across the exit road we had just turned off on and beyond the distractions near the station. I had a few seconds to shoot some of the final moments of the light that I had been enjoying for the past hour. Fortunately, the remainder of the drive was uneventful—except that, while the darkenss closed in, my mind’s eye was still full of all that glorious light and color that I had had witnessed.
Posted by Anita Jesse at Thursday, January 15, 2009