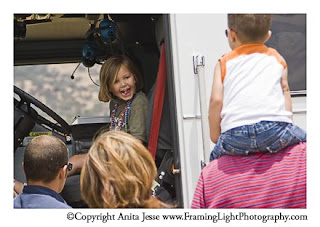 On Tuesday of last week, we left LA planning to return early Thursday. We were having the carpets cleaned in the house in Bear Valley and delivering some things we are moving by hand. But then, we started noticing all the preparations for the Fourth of July celebration and reading about the parade, and one thing led to another. We ended up staying much longer than we planned but had a great time. This was the first time we had given ourselves more than a few hours of being totally irresponsible to simply enjoy what is to be our new community.

The parade was a treat. We watched the hot air balloons from our backyard. We walked around the grounds at Cub Lake where the parade ended and the booths were set up, witnessed the demonstration of the cannon firing, met some people, and enjoyed all the families herding children with painted faces past the sights. It was a grand celebration of the birthday of our independence.

Do you think the adorable little girl in the shot above likes fire engines? Is that pure delight? Her little brother was a bit reluctant to be hoisted into the driver's seat until he saw how much fun big sister had, then he was ready for his turn. Normally, I don't grab shots of people's children—not in today's climate. But, no one seemed to mind, and in a couple of cases I couldn't resist. I stayed back out of the way while shooting and no one came after me to take my camera.
Posted by Anita Jesse at Monday, July 07, 2008