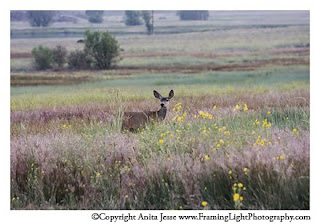 (Please click on the thumbnail to view the larger version)
By the time we rolled into the driveway in Bear Valley, it was a little after 8:00 PM. The last thing I expected to see was a lovely doe grazing happily on the meadow grass in the field next to our driveway. She was in the field that stretches west to the far edge of our property and continues, interrupted only by a few trees, all the way past the fire station and down to Cub Lake. She was startled, but far from panicked and I had time to frantically wrest the camera from the bag at my feet, rip off the lens cap, and snap a couple of shots before she began to move away. With only the 70-200mm lens, I still couldn’t get anything resembling a prize winner type shot, still it was a pleasure to enjoy her wild beauty and get a least something with a somewhat decent exposure in the fading light. We were fascinated by the ease and composure of her exit. Even in my limited experience, I have learned the truth of the theory that a vehicle functions as a surprisingly effective blind with many wild animals. They are so accustomed to seeing vehicles by now that they will accept one in their domain with relative calm. This doe was an excellent example. She wandered off, but she was far from desperate for her life.

That was Tuesday. Wednesday morning, I slept in and was finally up and about around 7:00 AM. First thing, I shuffled into the kitchen and dutifully hit the switch on Mr. Coffee, so The Husband would have his cup of java when he rolled out. Before I could bring myself to start the oatmeal, I simply had to grab some shots of the latest wild flowers. Most of the poppies were already gone, but these latest additions were charming. I grabbed the camera with that same 200 lens because I knew the light was changing fast and headed out the west side of the house—lightweight knit pants, black fuzzy bedroom slippers and all. After simply drinking in the scene for a moment and relishing the delicious colors that stretched before me, I stepped out on the porch and began to fixate on the flowers that were the objective of this morning’s trek.

At first, I sat on the porch steps and that seemed like an ideal perch. I could brace the camera with elbows on thighs and that was a plus, since none of the muscles in my legs or arms were yet fully awake. Of course it turned out that for one reason or another, the flowers nearest the porch weren’t quite right. Somewhat reluctantly, I put the sleepy muscles to work and started out across the one hundred foot fire break The Husband had cut a couple of weeks before. I couldn’t resist wading a bit into the fast-growing grass and flowers and decided to ignore the army of fox tails I was collecting in those fuzzy slippers and socks. The article I had read just a couple of weeks before about rattlesnakes in the valley crossed my mind and I knew I had to keep an eye on the footing in front of me watching for the hundreds of gopher holes out there. Nevertheless, you know how it is: I had to find the wild flower that was waiting for me.

While I became more deeply absorbed in what was at my feet—gopher domiciles, suspicious noises or movement in the grass around me, and bright, sunny flowers right and left—I was aware of movement off to my right. I jerked my head up and found myself staring at a doe that looked back at me every bit as startled as I. I believe that the movement I had seen was her head as it popped up when she became aware of me. We stood there transfixed for a second staring at one another, neither of us wanting to be the first to move.

I finally came to life and slowly raised the camera, but of course every setting was wrong and I was terribly excited. Well what to expect? I am not exactly experienced at facing a deer at that hour of the morning. In the first shot, she was chewing and looked a bit annoyed. I thought I had botched my first chance and that that might be the end of it, but once again there was no panic on the animal’s part. I venture that my heart was pounding faster than hers was. Though alert all the time, she began to wander leisurely toward that stand of trees. Fearlessly, I plunged deeper into the treacherous bush. No, wait; I got carried aware there for a moment. I plodded awkwardly in my blasted bedroom slippers, for crying out loud, into the uncut and taller grass, which of course meant even more fox tails and almost completely invisible footing. I tried holding my breath to avoid further alarming the doe as I followed her further into the field.

After we both advanced a few yards out into the field keeping our distance from one another, she apparently became more certain that I was harmless (that’s an understatement). I could swear that at one point she yawned. Heck, she may even have chuckled. At any rate, she finally began to cross my path and walked some distance parallel to me. Pretty cocky, huh? Because our land is terraced to drop several feet in elevation (eventually the land beyond ours drops down to the level of the lake), she had no trouble staking out a spot where I could see only her face and a bit of neck above the grass. We watched each other for a bit and periodically I snapped the shutter, but mostly I enjoyed our “eye contact”. She was probably about fifty yards from me (according to The Husband’s calculations later) and thanks to the 200mm lens serving as my binoculars, I could see her face quite sharply.

Eventually, the doe became bored and then ambled off down toward the trees leaving me to trudge back through gopher territory to the house. As I sat on the porch steps plucking fox tails from the fuzzy slippers, as well as the socks and knit pants, I turned over and over in my mind the delicious surprise and vowed in the future to never set foot outside without boots. You just never know when you will find yourself on safari stalking wild creatures through dangerous terrain.
In the Bear Valley Gallery here and here, I posted cropped versions of two shots taken during Wednesday morning's safari. I purposely didn't crop the first shot above, so you can get a bit of an idea as to how close I was shooting at 200mm. I know some of you know telephoto lenses well enough to make a good guess as to how close I was with the uncropped version. I wish I did.
Posted by Anita Jesse at Friday, June 27, 2008