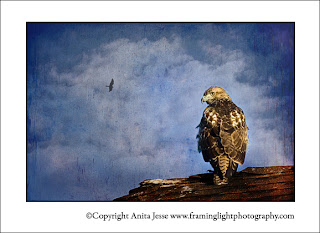 (Click on the thumbnail for the bigger, better version)
Off and on for quite while, I had grieved over our loss of Betty. For a little history of Betty, see the Bitchin' Betty post. Finally, another hawk appears to have taken official ownership of Betty's perch on our roof. This fellow is big, aggressive, and appears rather young. Just this morning, I watched him drive another hawk of "his" fence south of the house. Yes, it seems this fine-feathered friend of ours has declared our fence his territory and that effectively makes the large open space west of our house his hunting ground.

Later, when I took this photograph, the hawk sat on the roof occasionally showing me those yellow eyes that you don't forget once you look into them. Periodically, he calmly checked on me, uttering that "guh-runk" I had never heard. If this fellow had let rip one of the shrieks for which these the Red- tailed Hawks are famous, I would have immediately abandoned my post. There is a reason that movie makers almost always use the screech of these hawks when they want any sort of raptor to curdle blood.

In spite of some interest in keeping track of me, this hawk was mostly attentive to signs of movement in the grass below. Eventually, when he flew away, he soared all the way to the edge of the road. That means his prey was at least one hundred yards away. Makes you think about that phrase watching like hawk.
Posted by Anita Jesse at Friday, September 16, 2011