Please Don't Take My Pony Away 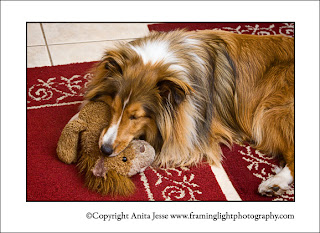 (Click on the thumbnail for the bigger, better version)
Galen loves his toys and has many favorites. However, we weren't prepared for the attachment he formed to this one. Clearly, this photo of our puppy dozing in the kitchen wouldn't persuade you to see the stuffed creature, wrapped in the little puppy legs and held carefully in the mouth, as a pony. But, I assure you there were more clues in Pony's salad days.
In case this image doesn't make clear the devotion Galen feels for Pony, let me tell you about the night Pony got a bath. Our first mistake was scheduling the bath late into the evening. Big mistake. The bath was a hand washing procedure and we didn't dare toss the stuffed animal in the dryer. No backup on this toy. Another oops. In the interest of caution, we elected to leave Galen's buddy to air dry. One can't be too careful.
Within a short time of Pony's disappearance, Galen began to fret and soon launched into an urgent search of the premises for his best bud. The agitated pursuit was accompanied by much low whimpering and an air of clear distress. In the beginning, we were somewhat glib. Having lived with dogs all my life, I had never dealt with a canine deeply attached to a toy, stuffed or otherwise. We both thought that the pup would soon be distracted and forget about Pony. Third and largest boo-boo of all.
Hours later, we were desperately trying to distract the now fully distraught dog and convince him that all was right in his world. We tried to engage him in play. We waved other favorite toys under his nose. The magic hat? Nah. Nothing. Sock Monkey? Pooh. Who cares. Even Foxy, couldn't hold his interest. Food? Phew! All Galen wanted was Pony. Freshly washed, but soaking wet Pony.
After a while, we assumed our pup would wear himself out and fall asleep. By now it was bedtime. No. We were sleepless in Bear Valley. All of us. For hours, Galen cried and paced outside the door of the laundry room into which his beloved Pony had disappeared.
I won't go into all the lame efforts we made to speed the drying of the stuffed animal and distract Galen, before we collapsed into bed exhausted and hoping for the best. When the long night finally passed, we awakened, exhausted, and dashed for the laundry room to end everyone's suffering. Suffice it to say that Pony hasn't had a bath since.
Posted by Anita Jesse at Wednesday, January 05, 2011