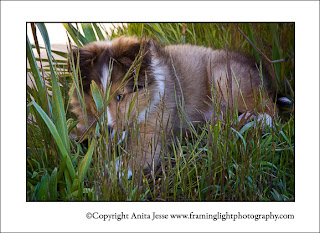 (Click on the thumbnail for the bigger, better version)
We were quiet here, yesterday. No party hangovers. No hangovers because it had been quiet at our place New Year's Eve, as well. We wished one another "Happy New Year" somewhere around Buenos Aires time, wrapped things up, and the day ended as early as usual for us. Ahh, party animals we are not. The tail end of my cold, flu, whatever, along with The Husband having a version of what is probably the same bug left us both a bit washed out at the end of 2010.

Not only was I quiet yesterday, I was downright lazy. I can't point to a single thing that I accomplished. If I were always that lazy, I wouldn't have any photos, or blog, or much of anything else for that matter. I suppose my batteries needed recharging after a brief burst of energy over a period of a few days earlier in the week. It was a crash-after-the-high episode.

On one of my more productive days, I had found some photos of Galen that I never downloaded from a memory card. This one was taken in late May soon after he became part of our lives. Of course, I love him looking all grown up now. Still, I can't help missing that round little puppy for whom everything was brand new.

While cleaning out those files, I faced the fact that I will make an exception for Galen and keep pictures that are nothing more than family snapshots. I almost never hold on to pictures that are mushy soft or hopelessly framed. I already have too many external hard drives. When it comes to photos of Galen, however, the rules change. After all, he's family, and he will never be that puppy again.
Posted by Anita Jesse at Sunday, January 02, 2011