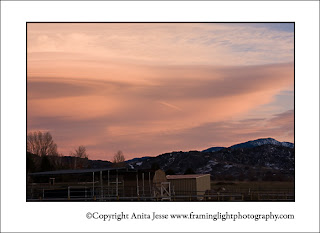 (Click on the thumbnail for the bigger, better version)
I take reasonably good care of my cameras, but I most certainly don't baby them. They sit about the house, ready for action, and seldom see the inside of a camera bag. If we are going farther than a day trip, then I pack both the 50D and the now backup 40D along with extra lenses, flash, filters, extra batteries, battery chargers, tripod—the whole kit and kaboodle. Camera bags are the only sane way to go in those cases. Otherwise, you would find one or both cameras on a table or shelf close to the action. In the case of day trips, the camera is in my lap if I'm the passenger; and, if I'm driving,the passenger seat holds one (or both) cameras. You can see that I loathe digging in a camera bag when the impulse to press the shutter strikes.
Conversely, I don't treat my cameras roughly. I handle them with some thought, almost never change lenses outside the house or car, and it takes a quite compelling scene for me to use a DSLR in extremely windy and dusty conditions. All this means that I never really wear out a camera. My sadly outdated original Canon Rebel is in excellent condition.
Still, my 40D is strangely accident prone. When the camera and the 24-105mmL lens were only a few months old, The Husband and I were walking alongside a two-lane road in the mountains of Colorado. Naturally, I was absorbed in the scenery around me. Naturally for me, unfortunately, that meant that I wasn't paying as much attention as I should have been to where my feet were. We were walking on uneven terrain that was at a slant anyway and I hit a patch of loose gravel. Before I knew what was happening I went down on the pavement, camera first. Eventually, I was grateful to find that the lens hood took the brunt of the blow—for the camera that is. I ended none the worse for wear—other than wounded pride—and the camera functioned beautifully the remainder of the trip.
Late yesterday evening, I grabbed the 40D—that's where the 24-105mm lens was attached—and headed for the back door to see if I could catch some of the rich coral and lavender in the sky. To the west, the sunset wasn't anything to write home about. The clouds in the east, however, were a different matter. Quickly, I stepped outside and failed to give much attention to Galen who, of course, dashed out with me. "Whoopee! Outside! Playtime!", he thought. The pup sprang up, caught his foot in the camera strap that dangled down and Crash! Yet again, the 40D hit the concrete. It was a horrible sight. I saw the lens hood smack the patio surface, bounce, then it was the camera's turn. Shplat! With a thud the whole thing finally settled in a heap.
Now, I really love having a second camera. Mostly, it's that lens-changing thing and I learned once that I don't want to be without a backup camera. Unfortunately, I can't brush off the cost of a new DSLR and a replacement L lens. My heart was right there on the concrete beside the camera gear. I scooped it up—the camera that is. (Who remembers rules about bending from the waist in a situation like that?)  Nothing obvious in the way of serious damage. A sizable ding on the body and some rather nasty battle scars on the lens hood, but the camera seemed to focus, the zoom functioned, and when I tried multiple buttons everything seemed to be in working order. Of course, I will do further testing of the battered gear today to make sure everything works, but I am reasonably assured that I got lucky.
Thanks Canon for making an affordable DSLR that will take some body slams and continue to do the job. Now, if you could help me learn to watch where my feet are and keep my camera strap out of puppy range....
Posted by Anita Jesse at Sunday, January 09, 2011