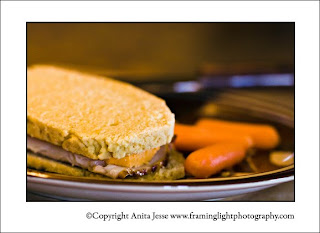 (Click on the thumbnail for a slightly bigger version)

I’m putting the blame for my late Sunday lunch square on Monte Stevens. I almost named this post "Put the Blame on Monte". Posts of his, such as this one, got me thinking recently that I don’t spend much time making pictures of homely things. His intriguing photos of simple, everyday objects kept nagging at me, reminding me that I needed to experiment. After all, the world of photography is not all horses, trees, paths, fences, grasses, clouds, and such. I rarely take photos inside and with winter coming, I would be wise to think more about indoor photography.

I had been outside, yesterday, working with the macro lens and it was already past my lunch time, but I could not stop thinking about those photos on Monte's site. Yes, my stomach was complaining at the thought of further delays, but it was the appetite for food up against the appetite for just one more photograph.

Ultimately, lunch was postponed again as I gathered a few things on the kitchen counter and set to work. I was having a good time, but I ended up not taking very many pictures in this session, after all. Okay, I confess that I couldn’t resist snacking on the set dressing. When there were only three baby carrots left, I surrendered, put down the camera, and consumed all the props.

There were lessons learned and some of them not so obvious. Clearly, if I am to produce any interesting photographs of this sort, I have to experiment more. But, next time I need to work with inedible props. Or, eat before I pick up the camera.