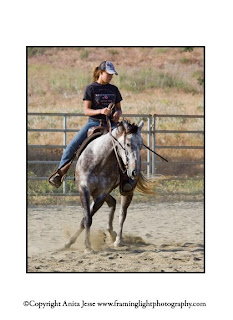 (Click on the thumbnail for the bigger, better version)
Yesterday included another brief period of further exploration with the 50D. The BVS Buckaroos have team sorting events (riders working with calves) at the Equestrian Center on Tuesday afternoons, and we had never yet gotten our schedule arranged to take advantage of the event. We finally pushed everything aside and did it. I figured the action would be an excellent test for new equipment.

Big Bertha was not invited. For the first time, in my brief history of being a camera owner, I had purchased a battery grip and I am trying to adjust to the new weight. Big Bertha would have put me over my limit. Instead I opted to use the 70-200mmL f/4. After all, I reasoned there would be plenty of light at 5:00 PM. Furthermore, with the type of action I would be seeing, I wasn’t much interested in trying to shoot at f/2.8.

Due to the high fence, I was not able to photograph the activities in the pens and you can not poke your head through the corral rails to get a shot since you would become a distraction to the calves and create an unfair hurdle for the team doing the sorting. (Sorting calves is not quite as challenging as herding cats—remember that terrific commercial a while back?—but it is not a sport for wimps, or riders with poorly trained horses.) I was a little disappointed about that, but enjoyed very much watching the teams work. There are some outstanding riders in our tiny community.

Because I was intent on some testing, I focused on riders warming up and schooling their mounts in the large holding corral. Specifically, I got some pictures of a friend’s daughter. This young woman is a top-notch rider and has won numerous championships in youth rodeo events. (I hope I haven’t used any terminology here in that description that is off the mark. I don’t know much about that competition.) I do know she looks as though she were born riding and it was a joy to watch her school this mare. 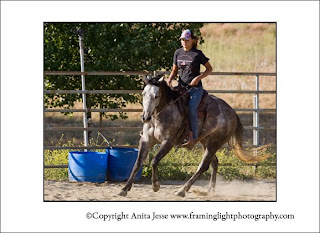 (Basic processing and cropping in ACR (CS3)—along with some pesky straigthening, drat).

One of my motivations for buying the 50D was the additional 5 megapixels. While I had never bought into the megapixel race (most of the time I forget how many megapixels my camera has—it's that insignificant to me), a great deal of recent reading has gradually changed some of my thinking. I read more and more action photographers talking about getting the shot and framing later. That switch originally producing a little dissonance in my poor limited brain, but I am discovering the wisdom of the expert advice. I have worked hard for some time now to frame in the camera rather than waiting to do that job in Photoshop. However, that often meant that with things happening very fast, my new awareness of framing produced decent framing or a clean shot one at the expense of the other. When shooting fast action lately, I am getting a much better ratio of keepers (technically speaking), by incorporating advice from action photographers. It doesn't mean I abandon all concern for framing. But, it takes a firm backseat to focus and holding the camera more steady. With AI Servo, my main priority is keeping that focus point on the animal. Framing after the fact means throwing away megapixels and now I have more to spare. A win, after all.

For me, the jury is out on the battery grip. It will take time to adjust to the completely different shape of my camera. I don’t have tiny hands, but at 5’3” they aren’t exactly big.

I had not used the shutter button to lock focus for a couple of years at least. Now, since the battery grip does not have a dedicated focus button, I shifted that function to the AE button. Although it is a tiny shift to the right on the camera body, yesterday it felt like a mile. My thumb knew exactly where that button was and does a bit of searching now.

I wouldn’t go out on a limb at this early stage, but my first impression is that along with the new sensor the AI Servo function is more reliable. (I am keenly aware that this could be nothing more than a new infatuation blinding me to facts.) Time will tell.

The weight of the 200mm zoom lens along with the battery grip and standing on tiptoe to get over a corral rail for a clear shot wasn’t exactly a joy. Still, I was glad I did it and look forward to another session.

By the way, I know I have a nasty tendency to tilt my frame to one side or another, and the bizarre physical contortions required yesterday amplified that problem. I find myself thinking about a grid. Any thoughts about that, anyone?