Thomas Wolfe Had a Point 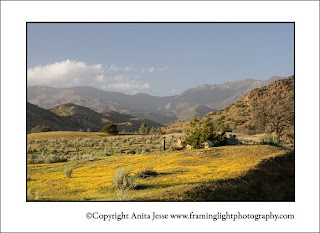 (Click on the thumbnail for the bigger, better version)
Sometimes you can’t go home again. Same applies to Caliente Creek Road. While my little story here has nothing to do with Wolfe’s isolation from home, it does connect with his famous title. And, let’s face it, I can go back to Caliente Creek Road and, indeed, have already done just that.

Sadly, it wasn’t the same. Those magical late March flowers that blanketed the area and the extraordinary spring light that touched the trees just as they were leafing out—gone. There still is a great deal there to interest me; but, as is often the case with love at first sight, closer examination has shown the subject of desire to be a bit more ordinary than it initially appeared to be.
[Note: The photo above is from the March 29 visit.]
The Husband was in a mood for a drive a couple of days ago, and I never say “no” to the possibility of a scenic drive. He wanted to check out the possibilities of expanding promotion of his farrier business into that close-by area, and I happily grabbed camera gear, eager to tag along for the ride.
The fact-finding mission was a success, and The Husband will be asking for help sending off ad copy to the small local paper. However, the drive convinced me that my original idea about making Caliente Creek Road the subject of my SoFoBoMo project was ill-conceived. The flowers are almost all gone; the oaks no longer appear lavender in the evening light; and, the greens are downright earthly. As I’ve said already, there are still many more photos to take along that road, but it won’t be the location for my photo book. The light is terribly tricky on that twisty windy road through the canyon. I will need to study the area for quite some time to do it justice.

But, all was not lost. An unexpected bonus of the trip was our stop in the midst of the ranching country outside the canyon. We checked out the Twin Oaks General Store and Restaurant. The Husband had wanted to stop to ask about the local paper and to grab a cup of coffee—which, of course, meant a treat for him. He had the gall to choose one of my favorite treats, one of those packages of powdered donuts. (I know, not exactly a culinary triumph, but I still remember how much I loved them back in graduate school.)

What now serves as a general store and cafe is an old schoolhouse—complete with a chalk board that covers an entire wall. The building itself will be fun to examine more than once, but the most fun for me was meeting a gentleman at a table near ours. Partly because there were a few interesting photos on the wall and partly because the sight of those donuts was driving me crazy (I have mentioned that I have to maintain a strict gluten-free diet. Sigh.), I soon got out of my chair and wandered. Before long, I approached an elderly couple by the wall and asked permission to look over their shoulders at some fading black and white photographs behind them. I asked a question about the photos and we got involved in a conversation. It turns out that the fellow in one of the photos was the gentleman I was talking to and he had lived in the Twin Oaks area all his life. Indeed, with his well-worn black cowboy hat, dusty boots, and weathered face, he looked to be part of the land.

As usual I chickened out on asking his permission to take a photo. They were eating after all, and once he apologized for being difficult to understand saying that he had just had his teeth pulled. The meeting had seemed charmed. These strangers were friendly and only appropriately guarded, faced with a stranger asking questions. The man’s eyes twinkled, and he was quick to smile in spite of his recent dental surgery. I couldn’t bear the thought of having it all end on a negative note. Not to mention that I haven't explored portrait photography and know I couldn't begin to capture the fascination of this marvelous old character.

The couple left before we did and I watched them walk out, he stiff and seriously favoring one leg. As they disappeared, I resolved to revisit The General Store and some day I will take a new photograph of that friendly face—along with some of the other residents of Twin Oaks, I hope.

Oops, I suppose I have made the point that on one hand, the Caliente Creek road just got more interesting as her blinding beauty faded. Beneath the surface is a grand old gal with marvelous stories to tell—stories that deserve more than a month’s worth of exploration by an outsider.
Posted by Anita Jesse at Saturday, April 18, 2009