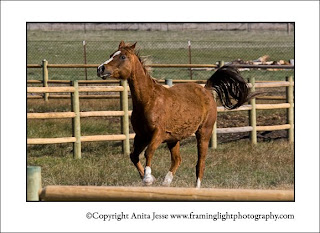 (Click on the thumbnail for the bigger, better version)
Yesterday at 5 PM, we had sleet along with an 18 to 20 MPH wind. One thing I have noticed is that precipitation here frequently comes at us on a diagonal—rarely straight down. Temperatures in the 30s, wind, sleet. So much for the imminent arrival of spring. Well, I can’t say that I hadn’t been amply warned.

At any rate, this weather proves that Lancer is a pretty smart horse. Lancer grew a heavy furry coat this winter and he hasn’t yet begun to shed. I guess he is getting the last laugh. Night, on the other hand, never grew as heavy a coat.

I think that I know some of the reasons for the discrepancy. (Mind you, this is not a scientific article.) First, Night was born in Idaho and lived there for the first couple of years of his life. Lancer had never lived anyplace other than balmy southern California. I am guessing that Lancer realized he was in for something early on with the first cold spell up here and his body went a bit nuts with the fur coat idea. The second thing is that Lancer is always a tad underweight. There is nothing wrong with him—well, nothing physical, at least—he is just hyper, even for an Arabian. He stays pretty much on the move. If he is penned up in his corral (currently a 24’ x 24’ space), he spends an inordinate amount of time weaving (shifting his weight rapidly from one front leg to the other). All he accomplishes is burning tons of calories, but he doesn’t see it that way. Still, it means that he doesn’t have much of a layer of fat to help keep him warm.

I have already mentioned that Lancer is from racing stock. While he has never seen a race track, his sire had quite a racing career. The result of the breeding is that while The Husband enjoys participating in endurance races, Lancer only gets the race part of that concept. His idea is to take off as soon a possible and cover ground as quickly as possibly. The endurance part means nothing to him. Because endurance rides are interchangeably known as endurance races, I suppose we can see where he gets confused. However, since the rides/races cover anywhere from twenty-five to one hundred miles, it is obvious that a horse who doesn’t “take care of himself” does not have the make-up for endurance. Lancer isn’t an endurance horse.

Night, on the other hand, is atypically lazy for the breed. Take note of that final qualifier. The gray would never be taken for a Quarter Horse, but compared to the chestnut he’s down right calm. He, by the way, is fine with endurance rides and sees no point in racing unless urged.

All this rambling leads me to my point about the photo above. When The Husband recently took Night out for a ride, leaving Lancer behind, I wondered what the show would be like. I was a bit surprised. While Night had remained agitated almost the entire time Lancer was gone, Lancer got over his abandonment issues fairly soon. He charged about madly for a bit, calling out to his buddy, and making a big fuss. But, before long, he began to notice that there was quite a lot of uneaten grass and after a bit, he would charge once around the pasture, pause to nicker plaintively, then take some time out from missing Night to nibble. Horses are a mass of contradictions.
Posted by Anita Jesse at Wednesday, April 15, 2009