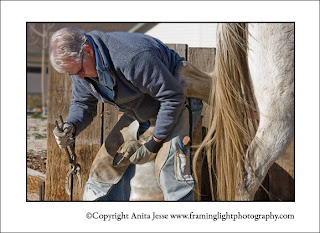 Since I have been whining here about all my deadlines, I thought I should offer a few specifics about some of my distractions. Several projects that I have been working on called for pictures of The Husband, and the photo above is from a shoot we did a couple of weeks ago to satisfy that need.

All these projects are connected to this life-change that we are pursuing. After years of making a living in a hyphenated career (actor-landlord (theatre owner)-teacher), The Husband decided, quite some time ago, to prepare for a career that would be compatible with our plan to abandon Los Angeles and Tinsel Town. (He still goes on auditions and works some, but the acting no longer ranks so high in that hyphenated list.) With the plan in mind, he apprenticed with a terrific farrier in the San Fernando Valley and began working there to lay the ground work for an escape. Fortunately, he found that he is well-suited to his new line of work and is happy with his choice. Still, it’s an occupation that strikes many as an odd one for someone to pursue after retiring (it’s very hard on the back), but if you knew him well, it wouldn’t surprise you. He’s handling horses, gets to be outdoors, works with his hands, and he is his own boss. All of that suits him just fine.

The catch is that once we got to our chosen destination, he was faced with establishing himself in a new-to-him community. It’s never easy setting up shop in a new location and, while there are plenty of horses in Bear Valley Springs, most of the owners already have settled on a farrier. Still, there is reason for optimism. His client list is growing slowly, but steadily, and we are doubling down on our promotion efforts. Since he plans to limit himself to a small select group of horses (we still aspire to semi-retirement in spite of the dip in the enonomy), we are confident that we will hit our target.

Meanwhile, I am in the midst of a crash course in graphic-design. Fortunately, I had dabbled a bit in the past, but I’m stepping up my game now. My head throbs from all the things that I am learning—not the least of which is being plunged into people photography. I haven’t done much of that and this assignment was different from anything that I had previously tackled. That was part of the fun.

It didn’t help that on the day we needed to get these shots the wind was howling. For me, however, the toughest part of the shoot wasn’t the wind, after all. I spent the entire time on my knees (thank goodness for knee pads) scrunched down at my lowered tripod, one hand on the camera, the other holding an external flash on an Off Camera Shoe Cord (the sun was bright and shadows deep). Believe me these are not pleasant positions for a body that has been through five hip surgeries. My joints don’t do the things they once did. To complicate matters, I had to move me (with all that paraphernalia) quickly each time the horse shifted, swung around, and dictated a new setup. I wasn’t brimming with confidence, but I managed to get some shots that The Husband is happy with and he is a tough critic. He isn’t cantankerous and picky; he just knew what he had in mind.

Now, I’m back to work. This morning, I’m placing some orders. I’m moving quietly because that cluster of deadlines looks restless, and I don’t want that magnetic field stirred up again.
Posted by Anita Jesse at Monday, February 02, 2009