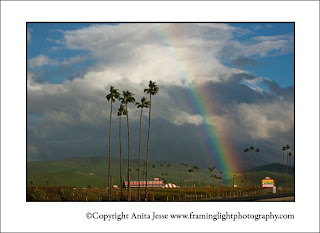 (Click on the thumbnail for the bigger, better version)
There’s more to the story of last week’s trip to Bakersfield. On the way home—as we left the downpour behind us, we were treated to the most spectacular rainbow either of us had ever seen. This one was significantly bigger than any I had seen including the amazing ones we witnessed in Hawaii many years ago. Furthermore, the colors were particularly intense. It was an unforgettable sight and I don’t expect to see one that rivals it for years to come. I wish that I could have been in a spot and had a sufficiently wide angle lens to show its full glory. The shot above is a reminder for me.

The rainbow and the amazing light that accompanied it, did ultimately tempt The Husband to exit off the freeway for a brief detour. We both needed to escape the traffic and stop, so we could put our full attention on the vision. One thing led to another and, after soaking up the rainbow for a time, we crossed under the freeway on the road to the south side of the 58. The sights there, bathed in that luminous light, provided still more treats. 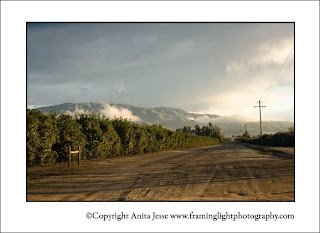 (Click on the thumbnail for the bigger, better version)
Posted by Anita Jesse at Tuesday, February 10, 2009