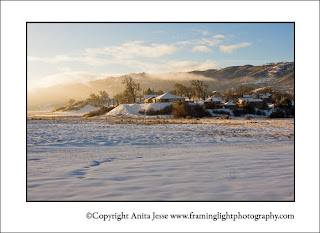 We have had our first snow of the winter. (Yes, I know winter hasn’t technically begun, but, like many, I have always thought of winter as beginning right after Thanksgiving, even though I know better.)

Bear Valley Springs has been a winter wonderland for the last few days. We have had just enough snow to be picturesque, but not so much that the snow plows are totally overwhelmed. Since we are on the valley floor and on the main road, the snow plow is here early and we aren’t snowed in.
Still, this morning while out enjoying the scenery in our new world, we began to ascend a hill that just yesterday had been completely safe only to find that today was a different story. With the temperature at 28 degrees, we came around a curve as we ascended the hill and saw not the blacktop with a sprinkle of gravel that we had seen yesterday, but ice. Because the challenge was too much for my car without chains, The Husband was forced to stop and cautiously back down the hill for several yards until we came to a driveway that would permit turning around. No more trying Oak Flat without chains in this type of weather. Not only are chains (or four wheel drive) encouraged for all of Bear Valley Springs during this weather, if you leave the valley in a two wheel drive vehicle and the weather gets really bad you may not be allowed to drive your vehicle back in. We have been informed that those who get stranded park outside the gate and hitchhike in on those occasions.

With several inches of snow having fallen over the last three days, I have been saying it’s a winter wonderland and it’s a wonder that I am living here. Funny about the resolutions we make, isn’t it? After one visit to New York City at Christmas time and an ill-advised youthful adventure that took me to a part of the Rocky Mountains far too close to the Canadian border, I had sworn never again to spend time north of the Mason-Dixon line. After all, as a Texan first (and that would be central Texas where snow is something you see every decade or so) and then a southern Californian, I am not built for cold weather. Of course, I will survive and I must admit that I find Bear Valleys Springs' winter attire quite fetching. I want to be taking photographs every minute. Alas, life interferes.

I did get a few other things accomplished besides taking photos of snow scenes. Thanks to the weather, I was able to draft The Husband for an indoor project. We placed some things up on the ledge in our living room. Our house is relatively new and the main living area has one of those graduated ceilings with a ledge at the higher end. While they are meant for decorating. I think they are best for collecting dust that I, for one, couldn’t possibly get to.

Now, this shouldn’t imply in any way that I am constantly on the lookout for any speck of dust in this house. Oh, if only ‘twere true. I’m simply observing that on those occasions when I am moved to dust, I couldn’t get to this ledge as it is about ten feet from the ground, and I don’t do extension ladders. I think I have a very good reason for my aversion to step ladders with my history of broken bones and mild fear of heights.

Besides, fortunately for me, The Husband shares none of my limitations. Thus, after venturing into our cold storage vault (that would be the garage) we dragged tons of stuff inside, separated it into piles on the floor and proceeded to decorate. I have been calling what we did ranching up the place. (Our house in Shadow Hills had a bit of a cottage feel what with all the trees, bushes, birds, and hummingbirds just outside large windows and sliding glass doors. Now, the look that felt so perfect for that house seems quite out of place in this house and on this place of land. Since we can’t possibly afford new furniture and new accessories, it’s time to improvise and create some new combinations of things we have. Goodness knows that with our garage stuffed nearly ceiling high we have plenty of stuff. I imagine this process will continue for rather a long time, since I have such trouble putting down the camera and getting away from the computer.