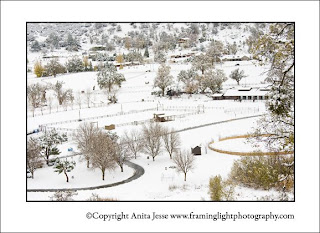 (Click on the thumbnail for the bigger, better version)
You know the phrase “kid in a candy store”? Well, that just about perfectly describes me during the past week. We had snow three days out of five and it only really began to melt yesterday. As we warmed up to 40 degrees yesterday, the sunshine has begun to have it’s way with the pristine white blanket covering the valley. Before the thaw began, I took hundreds of photographs. I took far more shots than will ever be processed, much less posted or shown anywhere. The joy was in the seeing.

My pleasure in the exploration was compounded by the fact that The Husband is also passionate about seeing. I think I have mentioned that he studied photography “in his youth” and while he lost his passion for the camera, he still has that eye. He drove—partly because he knows that I remain reluctant to drive when the roads are icy, but largely because he wanted to share in the seeing adventure. Having an enthusiastic companion made the adventure even more delicious. We drank in the sights—oohing and aahing aplenty; I squandered millions of pixels; ultimately, we came home each day tipsy from binging on the splendor of snow- covered fields and white peaks reaching toward the sky.
Posted by Anita Jesse at Sunday, December 21, 2008