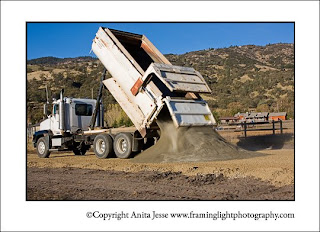 (Click on the thumbnail for the bigger, better version)
Most of the time when I go out to shoot I simply photograph what I discover on a given day, rather than setting out determined to find something specific. I make a conscious decision to remain open to what presents itself rather than to work hard at fulfilling a particular agenda.

When I photograph horses—especially when I am shooting for a client, it’s a very different story. First, I normally spend considerable time scouting the location, interviewing the horse owner, and getting acquainted with the horse. The day before the shoot, I plan and dream some of the shots I would like to see. When the dreaming is over and the action begins, my goal is to remain open to surprises that exceed my imagination, and occasionally I am gifted with moments that I never would have hoped for.

Of course, there is a general plan even for my everyday shoots. Perhaps I have an idea of the type of location I am looking for, or I may choose a lens depending on whether I am seeking landscape shots or macro studies. The lens decision may be influenced—at least to some degree—by the time of day, the quality of light, and/or the number of clouds in the sky. Most of time I simply grab my walk-around lens (the 24-105mm f4) and set out to do a lot of seeing and to take pictures. Yesterday’s photo was an exception to the rule.

Early in the day, The Husband mentioned that Buck had just dumped a load of rock dust for the pad behind the house and would be returning soon with another load. The pad that is being put in place will provide a foundation for the mare motel. As I have mentioned once before, I won’t try to justify why the structure is called a mare motel. After all, they don’t vaguely resemble a motel, and there are just as many geldings and stallions using them for shelter as there are mares.

At any rate, having previously watched Buck dump a couple of loads of rock, then road base, and part of the required rock dust, I started thinking that it would be fun to get a photo of the rock dust coming out of the dump truck. With that in mind, I stepped out my normal let’s-see-what-happens mode and began to plan the set-up.

Since I would be shooting in bright light, I would need my ND filter to give me the shutter speed that I needed. I had decided that I wanted to capture the sense of motion caused by the vibration in the back of the trunk, as well as the rock dust flowing toward the ground. The slow shutter speed I would have to use dictated use of my tripod, which I don’t use nearly as often as I should. It turned out that my ND filter was barely strong enough to balance the bright light and while I would have loved to have had one load to use as a test shoot that wasn’t in the plan. This delivery is meant to be the final load. Still, the shot turned out well enough to start me thinking about doing more planned shots. Besides, it was a great excuse to do something completely different and to see Buck’s work more clearly than before.
Posted by Anita Jesse at Thursday, December 11, 2008

Email ThisBlogThis!Share to TwitterShare to FacebookShare to Pinterest
Labels: the creative process