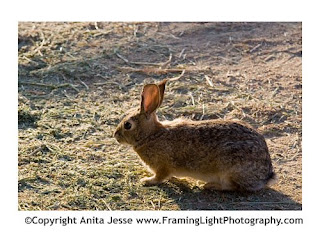 Yesterday was one of those days that didn’t go as planned, and it was lovely. I went with The Husband to the barn where the horses are stabled, since that is one of the locations I have wanted to include in my book. The light is almost always lovely there in the evening, but it was strangely flat last night. The sky was hopelessly clear and a wimpy blue. All the colors normally present in the hillsides were muted. The sunflowers were spent. The marvelous tree behind the barn attracted no crows tonight—perhaps they have moved on. Maybe the neighbor has chased them off. Not everyone appreciates crows roosting in their backyard. Besides, the tree has leafed out, so I wouldn’t get the picture I had my heart set on—the scene I have enjoyed so many times in the past and photographed half a dozen times. Things just weren’t working out. Never mind there were some fun surprises.

The first little gift was one of the inhabitants from the area. Most of the critters that abound in this neighborhood are domesticated—lots of dogs and horses. But they aren’t the only creatures that flourish in the environment along Little Tujunga Canyon. There are bunnies galore roaming about and one particularly cheeky fellow was hanging out smack in the middle of the space between the rows of stalls and corrals. I assumed I would never get a shot of him, since I had my trusty 24-105mm on the camera and I wasn’t apt to get very close. Still, I crept along toward him, staying in the shade under the roofline, hugging the supporting posts and surprisingly I ended up standing within probably eight feet of him. I had no idea whether I was getting an interesting shot, but it didn’t matter. Just standing that close to that wild rabbit—watching him periodically watch me out of the corner of his eye, yet stand his ground fearlessly—watchful as he munched on the stray bits of alfalfa, but un-intimidated—that was the kick.

A bit later, a friend who lives in the neighborhood spotted us and intercepted us with an invitation to drop by for a chat. She had an overnight guest—they were headed out early this morning for an endurance race. Thus, we spent the evening in the horse world—listening mostly to a couple of people with decades of amazing experiences in several equine disciplines. I accomplished absolutely nothing toward the SoFoBoMo project, yet came home unexpectedly content, even energized by the break. My head was buzzing with tales of endurance racing in France and Dubai along with the European Dressage world. I have the sense that the passion vibrating that room last night along with the peace and animal energy I soaked up at the barn will feed me in some indefinable way that I can’t possibly fathom. So far, I just know my brain didn’t want to shut down and I had trouble falling asleep, but I am making room for the mystery to unfold.
Posted by Anita Jesse at Friday, April 18, 2008