The Kid and Me 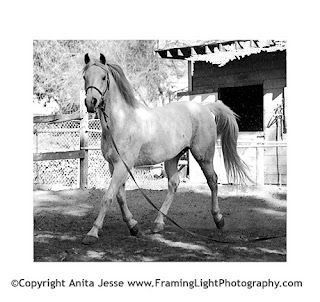 While I am not at all sad and feel quite optimistic about the big change that The Husband and I have made, saying the last goodbye to our house in Los Angeles brought twinges of nostalgia for the past. To further complicate matters, Paul Lester recently posted a photo that captures beautifully the relationship between a man and his dog. The photo started me missing animals I have loved. That twinge of nostalgia brought to mind other stories I haven't told.
Someday I may tell you about Kid Karrouf, the beautiful gray Arabian gelding I owned years ago. (That old photo above is the Kid, as you have probably guessed.) Perhaps I will tell you how he floated over the ground in long, beautiful strides and how he did flying lead changes that could take your breath away. (It might take some time to explain flying lead changes, but for now trust me—it’s an impressive feat when executed flawlessly.)

There are many stories about Rufus, as he was nicknamed by one of his previous owners. (On the strange coincidence front, Rufus happened to be the name of my first sort-of serious boyfriend—at least I thought it was sort of serious when I was seven! Rufus, the boyfriend that is, gave me beautiful statues of horses because he knew the way straight to my heart. Moreover, while we are on strange coincidences, the previous owner who gave Karrouf his nickname was, like me, named, Anita. Life is full of oddities like that.)

And when I tell you some of those stories, I will most certainly include a few about the horse who loved to leap sideways while traveling down the trail. One second Karrouf would be directly under you, trotting easily, and the next second he was a couple of feet to the left—or the right. There was no predicting which. And, how he loved doing 180 degree spins. Once in a while—rarely, but still...he would buck—a small buck, but still a buck—just because it felt so darned good. Believe me when I tell you these are not desirable in a steady mount. You didn't dare let your mind wander when you rode Rufus, because he frequently checked to make certain you were paying attention. Much of the time, he was a rock. But, he was full of energy and surprises. You never got bored riding Kid Karrouf.

I rode once in a very small local horse show (Karrouf was show material—I wasn’t), and when a jumbo paper cup blew into the ring and headed straight for the horse that some days loved to spook at his own shadow, my heart leaped into my mouth. I prepared for the volcanic eruption. My show career was about to end and it hadn't even begun. Karrouf didn't even flick an ear. I was certain he had suddenly been struck blind. The truth was simple. Rufus was at work, you see, and he understood that show business was serious business.

Once after a long rainy spell had finally ended—a spell that included several days of mostly sheets of rain and acres of mud, with no blue skies for days, the sun returned and the husband and I took advantage of an opportunity to spend quality time on our horses. Finally, a wonderful evening for riding in the hills. We took off from the stable on a long route, one that took us over a seldom-traveled fire road that was ideal for an exhilarating gallop. Karrouf loved stretching out to run. And, for me, sitting atop eight hundred pounds of muscle, thundering along on a hillside trail with the wind in my face and the sound of four hooves pounding the dirt was most of my childhood fantasies rolled into a handful of glorious moments. After the excitement, we walked a while, then trotted briskly—relishing the freedom and companionship. It was a picture-perfect ride, until we came to some rough terrain.

The ground was uneven—drop offs galore and boulders everywhere. At that juncture, I wasn't excited about The Husband's choice for our route. Still, I didn't want to be a girl about it, so I didn't say a word. But after a few yards, I dismounted to lead my horse through a particularly ugly patch. It seemed like a good idea, at the time. Unfortunately, I forgot to allow for the interaction between my leather-soled boots and wet, muddy boulders. I slipped. I fell. I landed under my horse. I yelped in pain. I felt like a fool. I tried to get out from under Karrouf (looking straight up at a horse's belly was not high on my list of favorite viewpoints) and discovered that, sure enough, not everything was working properly.

Meanwhile, Karrouf stood like a rock. I screamed at the top of my lungs to The Husband, who was, by then, quite a bit ahead of us—having been smart enough to trust his horse to get him over the rough footing. “The Rock” remained steady, in spite of being splayed out awkwardly with his front legs a good foot higher than his hind legs and a moaning human under his belly. Horses are not fond of this sort of arrangement. A horse normally gravitates toward solid, even footing. And, mostly, horses are not crazy about having a human lying on the ground beneath them—especially if said human is alternating peculiar groaning sounds with urgent shrieks for help. Typically, in that situation, horses prefer to move aside, perhaps look for something to eat, or, at worst, head for home without you. An unwelcome image flashed through my mind: Karrouf leaping forward, going for level ground, and my head directly in line with a back hoof. I tried to wriggle from under him to get on my feet, but couldn’t seem to make any progress. The boulders beneath me were treacherously slippery. Besides, the pain only diminished when I was very, very still.

Eventually, The Husband heard the cries for help, returned, and began helping me to get out from under my horse—and vertical. The part that wasn’t working was my right shoulder. It had obviously been the landing point when I fell. Sure enough, in the collision between shoulder and boulder, the boulder was the clear winner. The shoulder had snapped. As the sun was setting, The Husband succeeded in extricating me (I'm afraid I was little, if any, help), and next we set about getting me up on my horse. I just wasn't up for hiking back—the stable was much too far away. Besides, by then, I wanted no part of my leather-soled boots and those rocks that seemed now to stretch forever before me. We had to get me in that saddle.

Now I am not a big person, but hoisting a one-armed woman up to a horse's back isn't easy. I had little experience accomplishing the task with one arm dangling, useless beside me. While The Husband did the pushing and lifting, I did as much as I could with one leg in the stirrup and one on the ground, but neither leg seemed to be functioning up to par. Meanwhile, throughout all the grunting and false starts made to get me high enough to throw the right leg over my horse's back, Karrouf, The Rock, remained fixed to his uneven perch—his shoulders uphill, haunches below. So far, so good. No dancing, no flinching, no looking for a level spot. He was a statue.

Finally, The Husband and I got me in position, and I was in the saddle. We headed home as the the light faded from the sky. I was aware of every step as the two bones that had moments before formed a working shoulder rubbed against one another. It crossed my mind that as I sat on the gray Arabian who loved to scare himself with tales of monsters lurking along the trail at night, it was quickly getting quite dark and chilly, besides. Through a kind of fog, as shock began to set in, I wondered if I could stay on should Karrouf spook at a shadow—just to see if I was paying attention. Since I rode an English saddle, there was no saddle horn to grab with the one working hand and by then my legs had turned to jelly. I had no option but to trust my horse.

So, we made our way with The Husband in the lead, frequently throwing encouragement over his shoulder. I sat perched atop my horse, shivering and gritting my teeth, while the reins hung loose. As the darkness closed in on the moonless night, I must have been more like a sack of potatoes on Karrouf's back than a rider. When our dismal little parade came to the first stand of trees alongside the trail, I mentally braced. You may not know what my Arabian knew, but he was well aware that vampires loooove hiding among the branches of trees. I think I muttered something to him through chattering teeth, and without one muscle in his back so much as twitching, The Rock, who had become mobile immediately upon command to move, plodded on. Steadily and sure-footedly, he strode past those trees and dozens more during the mile or two home. There were no vampire tales that night. Kid Karrouf was at work.