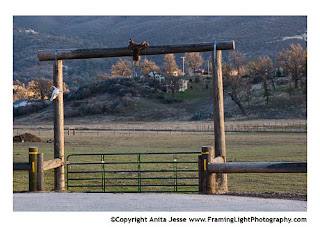 After we get moved to Bear Valley Springs and settled in—I figure that will happen sometime around 2012 judging by our current pace—one of my projects is working out what type of gate we can put up at our drive. Then, naturally, the gate will have to have a sign with a name on it. I am big on naming things. Since I was a little girl, one of my primary preoccupations was naming things I had, and I even devoted a great deal of time to naming things I didn’t have, but fantasized about having someday. At one point, I named an entire stable of stunning Arabian horses I just knew I would have when I was all grown up. I winced when others in my family named a pet. One of our dogs was named Skippy and that was a serious affront to my delicate young sensibilities. I adored that dog, but always lamented the fact that such a superior creature should be saddled with a name so pedestrian.

Indeed, decades ago, when I was first getting to know the man who became The Husband, I was shaken to learn that, when he was young, his family had three dogs in a row named George. Now you need to know that this was a gorgeous, sexy, gentle man and I knew I was falling hard. Still, how could I link my life to a man who came from such stock? Was there no one in his family with the imagination to come up with another name? Why did no one intervene? Yes, there had been some embarrassingly uninspired names given to animals by my family. But, at least the insult had not been mindlessly repeated! Sure, the man came from a good New England family and his father was a prominent Boston surgeon. But, please. George?! And, three times in a row! It was a hurdle for me. Until I met them all, of course and found they were absolutely wonderful—the family that is. (By the way, The Husband most often leaves naming chores to me. I think it’s a wise choice. I may not be great at naming, but I care and I try, for Pete's sake.)

Anyway, about the gate. From those early years, while I was naming those Arabian steeds, I dreamed of living on a ranch, or least a horse farm. The ranch fantasy was the first choice for me, with my Texas upbringing and all. Now, finally, I will be be living on something other than a postage-sized lot, and I have to admit that I am mightily tempted to finally hang a sign with a ranch-type name. (You know something like the Rockin’ J Ranch, or the BV2 Ranch.) But, again, it’s about that Texas thing. Now, anyone who grew up in Texas ought to know that a ranch in Texas means several hundred acres—at least, preferably a few thousand. If you call your place “a ranch” and it’s less than that, you brand yourself a city slicker, or a drugstore cowboy. (In Texas, they say, you are the type who is "all hat and no cattle".)

Well, I have lived with the hat and without the cattle all my life and while there still are no cattle in my future, at least I will not be living in a big city, and I will have a view of a barn (eventually) and horses in the pasture. Besides, I do live in California now, and in California—especially anywhere near Tinsel Town—you will see signs for the “whatever ranch” on properties that are half an acre at best. But, I know better! For me, there is no excuse. I suppose it comes down to whether or not I have been Californified enough to risk humiliation in front of any red-blooded Texan and put a name on the gate that says "ranch", thus feeding my childhood fantasy.
I have a feeling this major life issue will take some deep study and genuine soul-searching. Whew! It’s a good thing I don’t have to make a decision immediately.
Posted by Anita Jesse at Thursday, March 13, 2008