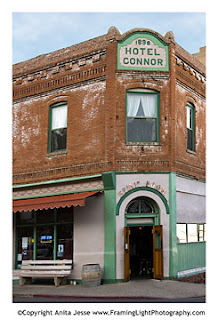 (Click on the thumbnail to view larger image)
I have visited Jerome, Arizona three times now, and each visit has been to a very different town. In the late seventies, what had once been the fourth largest city in the Arizona territory was not much more than a few rundown buildings threatening to collapse and a handful of inhabitants; in the mid-eighties, there was a growing art community; by 2007, it has become a bustling little town clinging to the side of Cleopatra Hill and filled with visual treats, including a dizzying array of art galleries. From 1876 to 2007, Jerome transformed from copper mining town and "the wickedest city" in the west to charming tourist mecca.
Posted by Anita Jesse at Tuesday, December 04, 2007