The Bad Backs in the Family 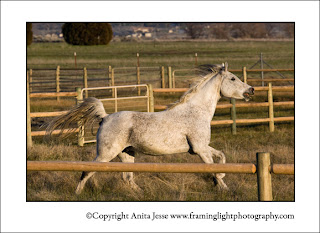 The last post called for a follow-up. My delay is due to one of those unscheduled rest breaks. But, I am on the way back.

Although Night is not out of the woods, The Husband reports that he is 60 to 70 percent improved. Judging by your comments, you will want to know that the gelding has not been in constant pain, limping about and miserable. The tenderness in his back only shows up on examination after a relatively rigorous workout. Of course, horses are stoic creatures. All the stories of the animals dying in harness or finishing a race on a shattered leg bear witness to that stoicism. If you ask a horse who trusts you to keep going, he will likely do his utmost to please you. The Husband pays very close attention to any trouble signs to assure that his horse isn't put in pain.

The report from the husband, after a test ride on Friday is that Night is around 60% improved. Better, but not out of the woods. Today, blood is being drawn to check for any other irregularities that might be contributing to the back soreness. The Husband has been searching for answers for some time now. He is not excited about either of the choices should the problem persist indefinitely. He can give up ever riding endurance and turn the gray into a pasture ornament, or purchase a new horse for endurance races and turn the gray....

Neither of us is excited about adding another mouth to feed, not to mention the inevitable medical bills. I shudder when I think of all the money that has been spent trying to solve these issues with Night. Horses are expensive animals to keep. Buying one is only the tip of the iceberg. And, we are not the type of people who can discard one when he is no longer serving the purpose you had in mind. Especially in this current economy, if you own a horse, you have a commitment that should be honored.

As to photographing the adventure last week, don't think it wasn't on my mind. I almost didn't write the post, because I thought "What is the point, if there are no photos to tell the story?"

However, as much as I would like to have taken a stab at making a photo-record, during the first part of the session, I was quite occupied. The gelding had just been let out after a trailer ride and was being handled by a stranger in a strange location. He was, shall we say, in high spirits. Completely relaxed on safe turf, horses can be downright sedate. Away from home, strange hands, some breeds especially get quite hot.

Night's nostrils were extended. Every muscle tensed to cope with all the unfamiliar stimuli. These are prey animals and they really appreciate predictability, not the unknown. We were on a somewhat narrow drive. I was busy staying out from under the gray's feet (have you ever noticed how quickly those feet can move?), while sidestepping Corgis (three of them), staying out of serious mud puddles, and steering clear of the edge of the drive that dropped off at a steep enough angle to get my attention. Plus, remember that I am a long way from agile. For The Husband, dodging the fast action was a piece of cake.

For the second part of the session, Chip and Night were in a covered 12x12 outdoor stall (read very poor light). The action was fleeting and extremely subtle. There definitely wasn't room in there for a slow-moving woman with a camera. Moreover, Chip was quite cordial, but struck me as a private and all business type of guy. I didn't think he would appreciate the idea of being turned into a photo-op. Still, if I were a talented photo-journalist as several of you are (Paul, in particular, comes to mind), I probably would have found a way. As it was, I was so mesmerized by the unfolding scene that I remained quite content just paying attention to every detail I could absorb. I would need to see this man work a few times before I felt comfortable attempting to record the story. For now, I have to settle for words.
Posted by Anita Jesse at Sunday, January 29, 2012