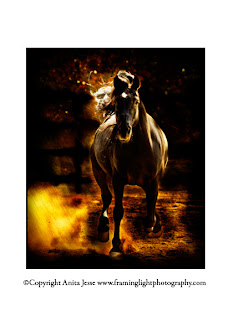 (Click on the thumbnail for the bigger, better version)
If you have heard of the multiple-Tony winning play, War Horse, you have probably been wondering why it has taken me so long to mention it. Naturally, I had long indulged in fantasies about whirlwind trips to New York to take in this production.  Many years ago, The Husband and I had the good fortune to see a staged version of the Tolstoy story, "Strider." it was beautifully staged and incredibly moving. It was  amazing to see Strider, the horse, so eloquently brought to life by a two-legged creature. It sounds as though it couldn't work, but believe me it did. I knew I would appreciate War Horse.

I wasn't completely surprised by the profound effectiveness of the illusion because of a previous theatre experience. Much earlier in my life, I had seen a Ballet Folklorico troupe out of Mexico City and included on the bill was a number titled "The Deer Dance." I rank that as one of my all time favorite theatre experiences. I never saw anything on stage in Los Angeles, New York, or London to top the emotional impact of the two dancers playing out the chase and ultimate demise of the deer along with the hunter's reverence for his prey.

The troupe performed in quite a large venue and when the dance ended, there was a brief moment of stunned silence, then a crowd of more than a thousand people leaped to their feet to bring down the rafters with thunderous applause that didn't want to come to an end. I lost track of the number of curtain calls. No one wanted the magic to end. The performance was wrenching, poetic, and has forever haunted my thoughts.

I have no doubts that War Horse, the stage production, would make for more wonderful memories. Of course, a cross country airplane trip now is about as realistic as climbing that peak in the Andes. But, wait! dum te dum! Steven Spielberg to the rescue!  A few weeks ago, I had read in one of the many horse magazines that come to our house that the film adaptation of the play is scheduled for release either Christmas or early next year. Theatre seats and I don't get along, so I will have to wait for a delayed gift from Mr. S. And, yes, the puppeteers from the play have been replaced by real horses, but the trailer already has my little horse-loving heart going pitty-pat.

If you haven't seen the trailer, check it out here.  I may not watch this film as many times as I have seen The Black Stallion—Caleb Deschanel's cinematography was inspired—but War Horse has made it to my must-see list.

By the way, the image here was included in the Bear Valley Springs Art Show last spring.
Posted by Anita Jesse at Friday, December 02, 2011