On the Inside, Looking Out 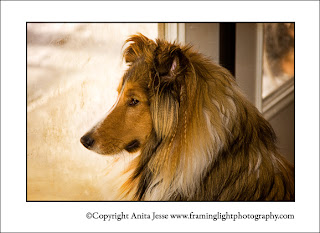 (Click on the thumbnail for the bigger, better version)
Galen is a funny pup. This picture of him sitting at the back door, gazing at his yard, depicts a sight that is not uncommon. Who knows whether this is about some form of canine longing, or maybe idle curiosity? If he has serious business to take care of, he finds a way to convey the urgency and does not settle for subtle signals. Sometimes it is the barking. But, often, if I am sitting, he has a different signal. He puts a paw on my leg to get my attention, looks into my eyes, and a sound comes from him that clearly says, "This is serious. Would I lie to you?" I have learned to heed that message. He isn't kidding.

Barking, on the other hand, may alternatively mean that he simply wants to go out. In those cases, when he does get outside, it is a toss up as to what he will do. He may be going out on business. But, there are times when he simply has a burning need to check out the newest smells in his territory. On another day, he just feels the need to sit on the edge of the berm in the yard and survey his kingdom. He is clear that that realm extends far beyond the fence that borders the little yard. Sometimes, he patiently watches riders go by on the trail to the south. There are days when his main duty is keeping an eye on the neighbors' horses and dogs on the property east of us. There have been times when I would swear that he is admiring the sunset.

In some instances, going out alone is not an option. He wants one of us to go outside and play with him. On those occasions, he has no use for private time in his yard. He wants to be the center of a very small universe—just Galen and at least one of his humans—sometimes it has to be the entire family. Nothing less will suffice. Other times, he watches from inside—perching by the door, or lying on the window sill, taking in the world out there.
Posted by Anita Jesse at Tuesday, November 22, 2011