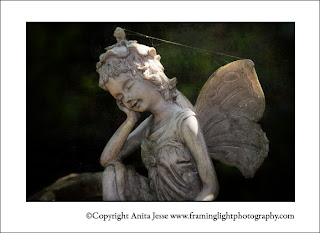 (Click on the thumbnail for the bigger, better version)
There are all sorts of names for mischievous spirits. Poltergeist has long been a favorite of mine. Perhaps, that is because of the smile the name brings me. When the  movie, Poltergeist, came out in 1982, my niece was a very small child and she called the spirits "poultry mice". I love both names, but admit that, in a pinch, I have to favor my niece's version.

Especially after the movie, I fell into the habit of blaming missing objects on the nature of these naughty spirits. I could just as well have blamed gremlins, pixies, imps, boggarts, brownies, hobgoblins, leprechauns, or even knockers—but the latter, only if we were in a tin mine. What mattered was that blaming a small impish spirit was more fun than simply admitting that I had absentmindedly misplaced something.

Soon after we moved in 2008, I told a story about the sad loss of the garden angel who had stood watch over our little garden in Shadow Hills. The Husband had made his final trip to gather the last of our belongings, and arrived there exhausted. A few weeks later, we discovered that St. Frances was not to be found. Somehow the angel never got packed. One of the angel's companions, a sweet garden fairy, and a treasured old branding iron picked up at a flea market were also missing. As is my nature, I grieved for some time.

It turned out that the new owners of our little house had assumed that the statue belonged to the property and that St. Francis had been left there intentionally that he might continue looking over the place. We didn't have the heart to insist on reclaiming the piece. Perhaps it was meant to be.

The branding iron and the fairy, however, continued to be mysteries that nagged at the back of my mind. The Husband insisted that he had packed them. I reasoned that the poltergeists felt they too were entitled to something out of all the upheaval in our lives.

Having been possessed by an urge to do some cleaning in the garage yesterday, The Husband, during the rummaging, discarding, storing, and sweeping, came upon something carefully wrapped in dusty bubble wrap. And, there she was. Our garden fairy. Out of hiding, at last. Returned, I reason, by the poltergeists, but, belatedly arriving in her new home. She has now taken her place among all the crippled angels that I rescued years ago from a garden shop we used to visit near the Ventura flea market.

If I squint my mind a bit, I can fathom the attachment poltergeists might form with a garden fairy. She might even have found the diversion amusing and joined in the game. Fairies are unpredictable, after all, and I like the image of our demure fairy cavorting with wicked little "poultry mice".

However, even though the fairy has been returned, those mischievous little devils are still hoarding the branding iron. Who knows? Perhaps, one day they will give it up, as well.  Let's face it, what use could mischievous spirits have for a branding iron?

I think I will leave that mystery unexplored.
Posted by Anita Jesse at Thursday, July 28, 2011