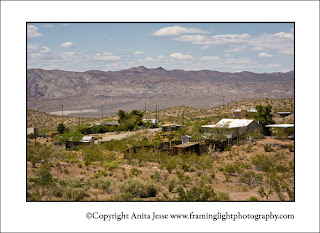 (Click on the thumbnail for the bigger, better version)
Randsburg, a small town on the western edge of the Mojave Desert, hangs on the side of a mountain and is sometimes described as a living ghost town. Like Jerome, Arizona, it retains most of its old west, mining town character while holding on to life. There are shops open on weekends and the General Store, along with a bar called The Joint, stay open on weekdays.

Randsburg is one of a trio of towns that were part of the mining district in the Rand Mountains of Kern County. Gold was first discovered in the area in 1896 and, just as the gold was becoming more scarce, miners discovered silver and tungsten. The mining continues to this day with several mines still producing.

A small amount of tourism contributes to the economy of Randsburg. (I have yet to visit on a weekend when the antique stores and the museum are open.) Many residents still prospect; others work in mining operations nearby. The Rand Mining Company, as well as the Twenty Mule Team Borax Mine in Boron, employ their share of Randsburg residents, while some folks commute to the nearby salt flats, for example.

There is enough to see in town to motivate several trips. However, it is not looking good for my return until after summer is done. June is another surgery month for me, then by July and August no one in their right mind will want to be that close to the Mojave Desert. At least not in my humble opinion.
Posted by Anita Jesse at Thursday, June 02, 2011