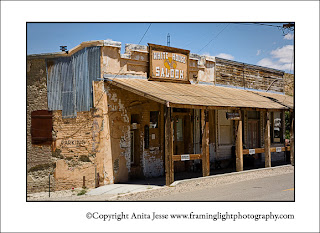 (Click on the thumbnail for the bigger, better version)
Yesterday, we were both feeling much better after a bout with a bug and decided to get down off our mountain for something other than a medical appointment. We headed northeast before noon. Our destination was Randsburg—one of those innumerable ghost towns in the west that boomed late in the 19th Century when the mines were yielding big money. The current population of the town is eighty and the shops there are open only on weekends. Even though we got inside only one building, there was plenty to see and nothing but sunshine outside. Randsburg deserves another visit.
Posted by Anita Jesse at Friday, May 20, 2011