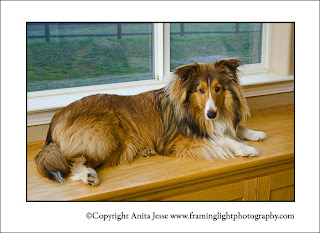 (Click on the thumbnail for the bigger, better version)
The window seat in the title is obvious. The critter is Galen, the Shetland Sheepdog—obvious if you have read my blog for a while. The bounce flash? That's another story, but a very short one.
Shortest story first. When I first began getting the hang of using off-camera flash, I struggled, but I have learned some basics. I soon learned that it allowed me to get some photos that would otherwise be impossible, and I learned to take the bad with the good. When I took these photos just after Christmas last year, there wasn't nearly enough light in our bedroom to make a photograph and bouncing the flash off the wall allowed me to capture the moment. I imagined the pictures being something that would make us smile and remember the day Galen discovered the window seat. It would be a charming occasion to recall.

Hah! Turns out the window seat was not a passing fancy with young master Galen. He is quite taken with it, thank you. It makes a fine perch from which one can survey one's back yard. This is a most  important task, don't you know. There are birds out there that bear watching. Moreover, you can never tell when one of those smelly underground creatures will pop up out of one of those holes out there, or some cat will have the gall to ignore the fence. It pays to keep an eye on one's kingdom.

Alas, watching over an entire yard, in addition to one's humans (not to mention toys) is a considerable responsibility for a puppy. Having a lookout tower of sorts offers a welcome advantage to a dog of rather small stature. Windows are placed unecessarily far from the floor and give a poor dog almost no help at all.  A nice wood window seat is also cooler than the carpet, when one's belly wants a bit of relief from the heat. So, you can see that, all in all, window seats are lovely things.
Last night our watchdog decided that he needed Pony to assist him with his responsibilities. He jumped up on the window seat, holding Pony in his mouth, and settled down to the task of surveying his realm by the light of a full moon. By that time, The Husband and I were already snug in bed. I wasn't about to climb out from under the covers and try to make a picture. Perhaps the ones here will get things started and your imagination can fill in the details.
Posted by Anita Jesse at Saturday, January 22, 2011