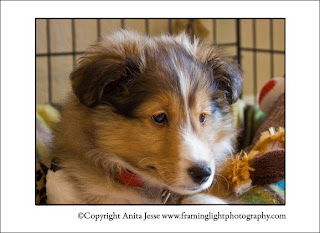 It’s always something with me, isn’t it?

This time, the distraction is eight weeks old and weighs maybe four pounds. So far, his only name is Puppy, although he is occasionally referred to as “Mcgraw’s Kid”. His sire, Brangay Quick Draw, is known to most as McGraw. Does this mean Puppy needs to have a name such as Wild Bill Hickock, or Wyatt Earp. I hope not.

One thing is certain. Not only is Puppy the center of attention, but hunting him down and preparing for his arrival totally consumed every waking moment for more than a week. I could say now that he is here, life will be more normal. But, that wouldn’t be smart, now would it? It is a fact that life will be different.

By the way, brace yourself for occasional puppy pictures. If you are one of those who can’t handle syrupy sweet puppy photos now and again, step away from the blog.
Posted by Anita Jesse at Tuesday, May 18, 2010