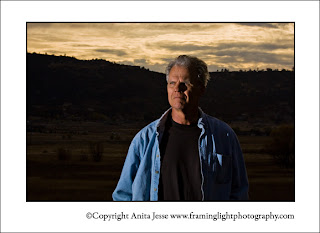 I'm glad that I stirred up some curiosity. But, Earl added an element of urgency by claiming that he was turning blue and passing out from holding his breath. He is a big kidder; still, just in case, I thought it would be better to quickly spill the beans. Besides, I have another shoot scheduled for tomorrow afternoon and some preparations to handle before then. Today, the fog is thicker than the proverbial pea soup. Tomorrow could prove very interesting. I'm sure there will be lessons to be learned.
I hope you didn't have your hopes up for something truly exciting here. I think you know me better. This isn’t really a big deal—just something new to me. First, I have to say that there are a gazillion things wrong with the photos here. They pretty much stink in more ways than I can count. For example, don’t you just love the line cutting through The Husband’s head? And that shadow into his camera right eye. Wow! Charming, no? No. I was thinking only about exposing for that sky and a certain kind of light on his face. It would have been nice if we had had a ladder handy to get his head up in the clouds. The second photo? Another long list that I won't start on. Still, you have to crawl before you can walk, right? Maybe this lighting business is ho-hum old hat stuff to most of you, but there are plenty new challenges in it for me.

The idea of working with more than natural light has been rattling around in the back of my mind for some time. The problem was that it was way back in a well-hidden corner and, mostly, I ignored the rattling. Probably close to two years ago, I bought a 580EX flash. Then maybe a year later, I got the 430EX. I was curious and was certain that, eventually, I would fully explore 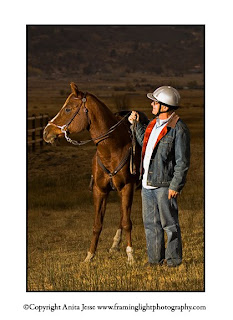 studio lighting. From time to time, I did play around a bit with both flash units, but the whole notion of using anything other than natural light just never quite took. At one point, I briefly considered selling at least half of my lighting equipment. However, before I could act on that thought, I would always have a flurry of interest that lasted a minute and a half. Long enough to put off selling—not long enough to develop any expertise. What it came down to was I didn’t have that much interest in shooting things that you could bring indoors. Horses and landscapes in the living room? Probably not. Don’t ask why that obvious disconnect didn’t stop me up front. Sometimes, I’m just slow.

Finally, I have gotten a glimmer as why those speedlights have been taking up space and have begun to investigate, with some seriousness, using supplemental light outdoors. It’s not something I have grasped readily, unfortunately. Rather, it has been a major challenge. Still, if you aren’t terribly smart and you lack talent, the next best thing is being stubbornly persistent. I have read I don’t know how many articles online in an attempt to cram some of this information into my brain. Yes, it still feels much like trying to jam a square peg into a round hole, but I know a little more now than when I started. I have photographed the strangest things in our house and burned up more than a couple of AA batteries. But, I am beginning to get a sense of where I want to go with this.

The next steps include a great deal more experimentation outside, because that’s where I really want to work. Moreover, I have to catch The Husband with spare time and in a willing mood. (Tomorrow I have another subject and The Husband is going to be provide me with a voice-activated lightstand.) Getting a handle on this new thing is going to take quite a while and yes, the delay of winter will exasperate. This is a lousy time of year to finally figure out where I want to go next. But, it's comforting to know that I have that stubborn persistence thing on my side. Because, there are images in my head and, by gum, I want to see them on my monitor someday.
Posted by Anita Jesse at Thursday, November 12, 2009