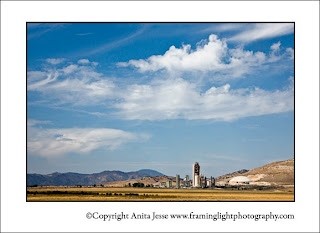 (Click on the thumbnail for the bigger, better version)
Our trip last weekend took us down into the desert and south straight into the soaring temperatures and the last gasp of summer 2009. Don’t get me wrong. There will be more hot days, but southern California isn’t likely to have another extended spell of three digit temps until next summer. Why did we take the old RV south and into the desert during a heat wave when we could have stayed in Bear Valley Springs where it was 10 to 15 degrees cooler? We were traveling to a birthday party of a dear friend, then further south to a family wedding.

The early portion of the trip was blistering hot and, just north of Riverside (a little over half way to our first destination), we heard a frighteningly loud kerthump and felt something hit the underside of the vehicle. We both had had our eyes on the road and felt confident that we hadn’t run over anything. The vehicle was driving as though nothing had happened; but, The Husband realized it had to have been a blowout and exited the freeway. Sure enough, the tread was stripped from a rear tire. Interestingly, it hadn’t lost any air. Blowouts are common on southern California highways in the summer. With the temperature at 110 degrees, the asphalt is a virtual frying pan and not exactly what the doctor ordered for rubber.

Blowouts are never fun, but at least we weren’t in the middle of the Mojave. After one false lead took us to a Goodyear tire store that didn’t have the correct model tire, we found the right store and headed for the waiting room to relax while the Goodyear guys did their thing. We knew we were in trouble when we spotted large fans aimed at the guys behind the counter. It had to have been at least 85 degrees in there, but it sure as heck beat waiting beside the road for the insurance company’s version of AAA service to arrive. (Been there, done that).

Why didn’t we simply stop on the shoulder and replace the tire with the spare. First answer would be the heat coming off the pavement at 20 or 30 degrees higher than the 100 plus degrees we were getting on the indoor/outdoor thermometer. Second, the spare was at least as old as the tire that blew and The Husband wisely chose not to risk two blowouts in one trip. We just counted our blessings since we didn’t get hurt with the tire holding up as it did and it had only taken us about 30 minutes to finally get to the Goodyear store. The only bad news was that by the time we were back on the road it was very late and we finally rolled in at the party just at the tail end of the celebration. We even missed singing “Happy Birthday” to the birthday girl.

The next leg of the trip was uneventful, the wedding was lovely, and it was wonderful seeing The Husband’s family. Since all the siblings are scattered across the continent, reunions are special and infrequent occasions. Having come perilously close to one of my heatstroke numbers, I was pretty blitzed and I hardly picked up a camera during the first two days. Then the heat wave broke on Monday and the trip back was easy. A drive that took nine and a half hours on the way down took five hours for the return. I was treated to the beautiful clouds you see in the photo here and it was cool enough to enjoy them. By the time, I took this picture we were only about forty-five minutes from Home Sweet Home and I was ready to put the weekend behind me.
Posted by Anita Jesse at Friday, October 02, 2009