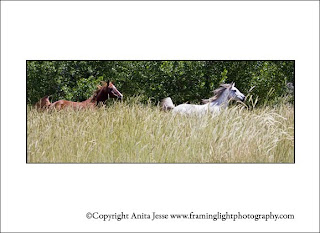 (Click on the thumbnails for the bigger, better version)

These photos were made a few months ago and the horses were only turned out in that lush grain a couple of times for very short periods before the grain was mowed down.

The grain was beautiful to look at, but too rich for a grazing pasture. At least for our guys—especially the gray. After a limited grazing session, The Husband checked Night’s feet and discovered troubling signs in the white line. He had hoped to be able to put the geldings in that pasture for fifteen or twenty minutes a day without danger, but it appeared the grain was just too much for Night. Out came the tractor and down came the grain.

Paying attention to those troubling signs in horses’ hooves is critical to the animal’s survival. If the horse is prone to laminitis, permitting access to rich food can be a fatal error. The Husband has always been attentive to these matters, but has become even more keenly aware of these problems and warning signs since taking on his new career as a farrier. Never one to do anything halfway, he immersed himself in learning his new craft and his dedication has paid off multiple times.

The Husband's dedication has paid off multiple times now. He is currently celebrating the success of one of his rehab projects, a horse that had been shod for years and whose feet were in sorry shape. Fortunately, the owner took The Husband’s advice to take the old gelding barefoot for natural trims. Now Turbo’s feet have been rehabilitated and are in excellent condition. His life expectancy just got bumped up by a few years and that’s good news.