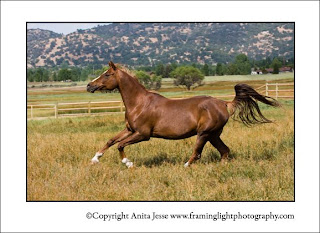 (Click on the thumbnail for the bigger, better version)
Yesterday morning, The Husband took Night out for a ride. That meant that I would be treated to a Lancer extravaganza, so I grabbed the camera, armed with Big Bertha (the 70-200mm f/2.8L), and headed out to the pasture. The chestnut, often affectionately referred to as Banana Brain, did not disappoint. The shot above is one of my favorites from the session. Having finally shed out that ratty, moth-eaten, end-of-winter coat, he is sleek again—back to his rich, burnished chestnut, and he gets enough exercise these days to have regained muscle tone. I thoroughly enjoyed the shoot, then later The Husband and I repeated some of our ooh’s and ahh’s regarding his return to his handsome equine self.

In the evening, we headed out for a hike and didn’t get home until twilight. The Husband went out to the pasture to put the horses in their barn and was surprised to see that Lancer didn’t meet him at the gate. He soon discovered that the poor guy was injured and did not want to move. Although I was not there, I can well imagine the horrible thoughts that were racing through The Husband’s mind as he examined the leg and that hoof to determine where the damage was and the level of severity. Most people know that horses don’t always survive serious leg injuries. (If you are curious as to why, it is because their digestive system is directly tied to their ability to move. No movement- no food digestion. One leg out of operation means throwing excessive weight on other feet and they develop problems. A horse can’t survive lying down.)

A terrific veterinarian that The Husband knows from endurance rides came for a flashlight and lantern check-up and confirmed the diagnosis. In one of those roughhouse episodes, Night had landed a kick on Lancer’s front leg (you can see where the hoof shaved off the hair and the swollen tissue makes it plain why he does not want to use those muscles.) Since the gelding can put his full weight on the leg, the doctor felt confident that it is not broken. The poor guy was alert last night and eating. He was also keenly interested in the carrots offered to him. I helped The Husband grate some carrots into a mixture including grain and molasses to mask the bitter taste of the bute (phenylbutazone) to dull the pain and reduce the inflammation. While Lancer would not tolerate an ice pack on the swollen leg, he did not resist cold water treatment.
This morning he is still on his feet, but not moving very much. While he is a bit depressed, he eagerly lapped up his bute-laced treat. He will have several days of recovery. Meanwhile, we are in for a bit of anxious watching and waiting.
Posted by Anita Jesse at Wednesday, June 03, 2009