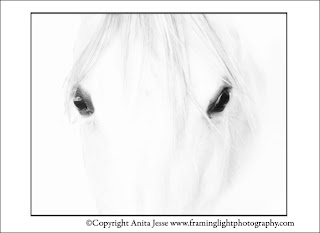 I am still in Art Show mode and, because of the images I am working on, I can only see horses, as you can tell by the picture above. Because the equine part of the show in May got the most attention, I have added only new work that capitalizes on that interest. The new work for the June 5th show consists mostly of stylized pieces such as the one here, and most of them involved considerable Photoshop work. Once again, I enjoy that part of the job, so it hasn’t been drudgery. Still, I have my days when I think that I am tired of the monitor screen, don’t want to touch the mouse, and just want to take new photographs. As you might guess, the start of my SoFoBoMo project is still at least a week away and I am getting a little antsy about that. Finally, I am in the midst of framing for the show with ninety percent of the printing done, but I won’t wrap this up for a few more days.

When I am doing this much processing, it seems I slip almost completely into a non-verbal mode. Anyone who visits this blog frequently knows that most of the time I can happily chatter on almost endlessly about almost nothing. But, when I am working on certain types of pictures, I tend to sink down into another kind of being and there aren’t many words there. That’s where I have spent most of the last week.

Not surprisingly, preparation for this show has been a learning experience. The learning is in the form of a reminder. Some of the new pieces were worked on months ago (years in some cases), but were never printed; and, while the files looked fine to me on the screen, test prints proved that they were not quite ready for prime time, after all. It is amazing, isn’t it, how great the distance between “almost good enough” to “yes, that’s what I was looking for”? Those last few tweaks go slowly for me, partly because I often need to walk away from an image for a while and come back to it with fresh eyes.

And that’s not the half of it. When I am working on a new piece, I usually have no clue where I am headed. I just know that there is the shadow of something in the photograph and I won’t be content until I have coaxed that out. And, wouldn’t it be fun if it were as simple as sprinkling some Photoshop fairy dust on the image and waiting for the new image to magically emerge? Still, the ability to transform a photograph so profoundly (even with hours of patient starting, backing up, and starting again) to ultimately produce something that touches people is almost magical to me.

I am quite aware that this talk about so much work in the digital darkroom brings up a sensitive topic for many photographers. If you are purist and don’t think photographs should be tampered with, you would run—not walk away from much of what I produce. I happen to swing back and forth between the two schools of thought. I have periods where I am only interested in photographs that required minimum processing. On the other hand, I go through phases of taking photographs to the point that many viewers aren’t certain what the origins of the image might be. Never having functioned as a photographer prior to digital, I have no allegiance to the purist school. I live there when it pleases me; when I get hungry for something else, I switch back to the fairy dust.
Posted by Anita Jesse at Wednesday, May 27, 2009