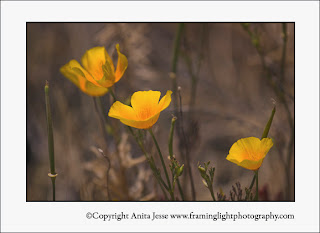 (Click on the thumbnail for the bigger, better version)
Since the poppies came into bloom weeks ago, I have had in mind how I wanted to photograph them. Foolishly, I fell into the old trap of stubbornly clinging to that image in my mind and waiting for the right time to get those photographs. Nature has had an entirely different plan—presenting us with an unseasonably cold June and an unusual amount of early evening clouds. Day after day, new roadblocks. When the light was right, the wind was howling. If the wind was not blowing and the light was nice, the poppies were not quite open or had already closed for the evening.

Today, I finally let go of the images in my mind and took photographs of the poppies we have: windblown poppies on a June day when the temperature probably never made it to 65 degrees. I experimented with 1/2500 shutter speed to see if I could get anything; and, even though I moved very little, the wind was blowing fast enough that I got several compositions within a few seconds. I ended up with one that was surprisingly sharp; but, in the end, it is the softness of this frame that feels right to me. Not the poppies I was waiting for, but the poppies I was offered.
Posted by Anita Jesse at Sunday, June 14, 2009