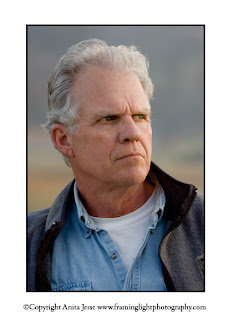 (Click on the thumbnail for the bigger, better version)
Note: This started out being a post about shooting portraits, but I have to take time to vent over the frustration of translating skin tones to a jpeg for the web. (The sound you hear is made by the steam coming out of my ears.) I have printed this picture and it looks terrific. In the web version, however, the skin tones are something far less than wonderful. Every color correction method I have tried fails to solve the problem. (At least, the one at the main gallery is somewhat better.) Ultimately, I gave up hope and decided to just put up the post and complain. Now, on to the original reason for this post.

For some time, I have been flirting with the notion of taking portraits, but I never seem to follow through. I have had plenty of urging from fellow-bloggers to give it a try and I know that I will have to take a run at it—if only to get it out of my system. There are a number of reasons for my resistance, some of which I have talked about in earlier entries here; but some of the resistance comes from a source that I have never mentioned. I spent over thirty years of my life in Los Angeles living and breathing that particular air of Tinsel Town where “headshots” are central part of the actor’s life. Having experienced both personally and vicariously all the angst surrounding the selection of photographers, the disappointments, and frustrations from those photo shoots, I have some residual feelings about portraits that I have yet to fully resolve. As I’ve said before, I prefer subjects that won’t complain endlessly about “the way my eyes look” or “I don’t think I really have that many wrinkles”; “my nose looks funny”, or “my hair looks fuller than that, don’t you think?”

As I said a few posts ago, I am not anxious when shooting people with their horses. In those cases, the person knows that she (more often than not it is a female horse-owner) is not the star of the shot, and I can help her to focus all her attention on her horse. Of course, there is the need to have two subjects focused when the owner is in the shot, but the horse is the leading character. Even when viewing the pictures, the horse-owner is more apt to be concerned with how the horse looks, than her own hair or nose.

All my angst aside, I recently got an idea to take some shots of that handsome devil, The Husband. By the time the urge struck, it was late evening and we were “losing the light” (that old saw from the location shoot). In a rush, I grabbed the closest camera and realized that I wouldn’t have time to change lenses. It was the 100mm macro or nothing. Both The Husband and I decided “what the heck” and found a spot in the backyard to shoot a few frames. The one above is my favorite and, by the way, The Husband likes it as well. I ended up thinking the macro lens is not a bad choice. Normally, I would have chosen the 70-200mm. Both lenses are f2.8 (a lovely advantage); but I am just not accustomed to the need to zoom with my feet.

Of course, this outing was easy. Because it’s difficult to get a really bad picture of The Husband, I avoided many of the typical problems of portrait shooting. Moreover, I was totally relaxed when shooting since the entire thing was a last-minute whim and there was nothing on it. Still, I may yet do more experimenting with putting people (who don’t have their horses with them) in my photos.
Posted by Anita Jesse at Tuesday, May 12, 2009

Email ThisBlogThis!Share to TwitterShare to FacebookShare to Pinterest
Labels: cameras and gear, portraits