Hanging Out With the Guys 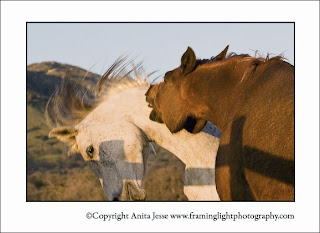 (Click on the thumbnail for the bigger, better version)
For a couple of evenings this past week, I spent some time out in the pasture hanging out with Lancer and Night. Friday, I darned near got frost bite it was so cold, but I have a several motivations.

Not only do I just enjoy watching the horses from a closer point, I certainly hope to get some shots that I like. My major motivation is getting back to a point where I am more comfortable shooting action. For many months now, I have been shooting landscapes and a little macro with very little action. I had gotten to the point of feeling totally out of shape for the demands of fast action shooting. The shots of the horses that I have posted recently were shot from safely outside the pasture, because I was still hobbling about on my abused ankle. I have finally reached the point where I feel relatively comfortable wandering about in the field—ground squirrel holes and all. The footing isn’t the very best, but, so far, so good.

One of the reasons that I need practice is that my best lens for shooting horses is far and away the 70-200 f2.8L, but the lens has two major drawbacks. 1. I foolishly saved money (this was done a couple of years ago) and didn’t get the IS version. 2. The weight. I call this lens Big Bertha. In the past, I used this lens only with a monopod. While I was never satisfied with that arrangement, I didn't feel confident without the security of the monopod. I put up with it, even though it is a definite hindrance. Most equine photographers handle that lens handheld for action, and I am slowly working my way up to some consistency with it. Of course shooting handheld will mean accepting some major disappointments with shots that would have been terrific, if only they were sharp. On the other hand, it means getting some shots that definitely would never be possible while lugging around a tripod and would most likely be missed with a monopod. I am going to go for the spontaneity and flexibility. I will have to live with the near misses.

My time with Lancer and Night is relaxing. Mostly they just eat their way along—not wildly entertaining; but I enjoy watching them do almost anything. Both of these evenings, however, the guys have put on a little show for me, and I thought I would share a couple of my practice shots. These are the antithesis of the glamour pictures that I will do more of as the weather warms—shots showing the horses “stood up” nicely with coats clean and shiny, eyes wiped clean, chin-hair trimmed sleek, hooves polished. Here, they are just being horses—and happy horses with room to play. 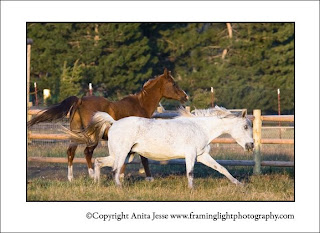 By the way, it may look as if Lancer (the chestnut) is standing still in the second shot, but he had just been crammed into the fence by Night, while they charged around the pasture. Night was playing the aggressor the second evening and was crowding Lancer, just for fun. They had a good romp, and I was treated to grand entertainment along with plenty of practice shooting fast action.
Posted by Anita Jesse at Sunday, April 26, 2009