Moving Down the Highway 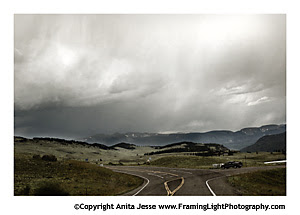 (Click on the thumbnail to view larger image)
Once again, I ran across this shot in the Colorado folder and couldn't seem to move away from it. At first, I thought the pickup waiting at the intersection was distracting and I had to remove it from this beautiful view. That appeared to be a daunting and frustrating task, but mostly I just couldn't get motivated to start the job. Ultimately, I couldn't bring myself to clone out the vehicle. It's not just that the object adds scale. The more I looked at the image, the more I realized that the pickup is a vital part of the original story that caught my attention. To begin with, this was a grab shot—taken on the road through the windshield (you can relax—my husband was driving), and I had never been fully certain why I was compelled to trip the shutter while moving down the highway. Revisiting that moment yesterday, I began to realize why I couldn't get it out of my mind. The moment really speaks to me about what we saw over and over throughout our road trip: The stamp of mankind is all around us and, to avoid it completely , one would have to strap on the serious hiking gear and trek deep into the wilderness. Still, in spite of that constant intrusion, what my eye repeatedly frames is an image that resembles the one above: an image that has as it's subject matter approximately one-third man and two-thirds God. There was a time when with each landscape shot, I felt compelled to eliminate every telephone wire along with any other trace of man's intrusion on this beautiful planet. I know this is a common pattern with anyone who enjoys shooting landscapes. Lately, I am coming to peace with those intrusions on the pristine nature around me. Rather than being frustrated by them, I have begun to feel that, in some instances, the man-made marks provide instructive contrast. For me, they are so mundane they serve to emphasize the grandeur of my natural surroundings. Moreover, the marks are so dwarfed by the earth and sky, they actually enhance my appreciation for the stunning glory of our planet. The image speaks to me, so I wanted to share it with others.
Posted by Anita Jesse at Thursday, July 26, 2007