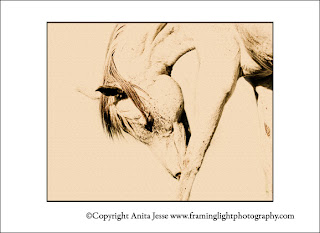 (Click on the thumbnail for the bigger, better version)
Most photographers enjoy gear talk and there is quite a bit of chatter online about upgrades to cameras and gear. I got to thinking. If there were ever to be an upgrade on Anita (you know, the Anita Jesse Mark II, let's say), I  just hope auto focus will be included on the next model. This old model is clunky to operate, at best.

Clunky in what ways, you ask. Well, you would think that I would be focused on the upcoming Art Show, since the work has to be hung April 16. Yet, here I am, not even close to wrapping all the work for the show, and I have veered off into yet other projects. Yesterday, I should have been clearing the studio of some of the junk that has accumulated in that room during the last several months. It is obvious that work space has to be cleared for the mounting and framing yet to be done. Still, was I focused on the show? No, of course not. I had the brilliant idea to try a new tutorial "just for a minutes of distraction and a bit of relaxation."

Well, one thing led to another and there went the day.  Sure, I had a great time following one idea to the next, and then another. Heck, I enjoy the journey, even though I sometimes end up in a familiar place with only a slight new twist. The image above is one of those cases. At the same time, this is one of those pieces that I have worked on two or three different times and had never discovered where it wanted to go.

As always, it's the process that is exhilarating and satisfying. And, I won't kid you—I do enjoy the adrenalin high that comes with ideas popping. No doubt there is a downside for me. By the time I have worked until I'm bleary-eyed and there is no more adrenalin to pump, I am left worthless for about 48 hours. Only after I begin to recover can I fully enjoy the residual inspiration and sense of renewal.

Returning to the upgrade notion, maybe this Mark II version of Anita should have more power, as well. Longer-lasting batteries that don't wear out over the years, perhaps?  It wouldn't hurt to include more memory, definitely an improved sensor, and maybe....
Posted by Anita Jesse at Tuesday, March 29, 2011