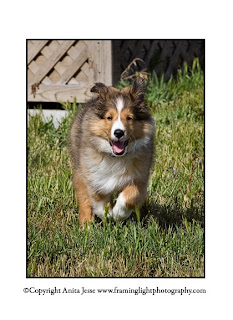 The offspring of Brangay's Quick Draw finally has a name. Well, this name has stuck for a few day, but I confess that every other day one of us comes up with at least one, “We should have named him ….” The answer came while scanning a list of Gaelic names—his ancestors are Scottish, after all. I came upon Galen and it had a nice sound to it. When I tried it on the husband, he didn’t sniff and wrinkle his nose—yes, that happened with a couple of my submissions. Instead, he cocked his head to one side, narrowed his eyes, rolled the name around on his tongue a couple of times, then finally pronounced it a fine name, indeed. When I tried it on the puppy, I got a somewhat similar response. Well, the cocked head, at least. So, for the moment, Galen it is.

Our training is proceeding quite satisfactorily. Without fail, I throw on jeans and shoes to get puppy out to the back yard for a brief walk between 6 and 7 AM, prepare his breakfast, gulp down some water while a cup of coffee heats in the microwave, and check to be certain that there are treats for the big walk that will follow puppy’s breakfast. After Galen’s private business has been attended to, the longer walk includes hitting all the important checkpoints along the edge of the yard where we check to be certain no marauding invaders approach the castle. If I should become distracted at any of the checkpoints, Galen sits, patiently reminding me that castle-guarding Shelties don’t come cheap. While he indulges me, I dig in the treasury of goodies for a treat, and after the brave knight has been lavished with praise and the treat has been consumed, we happily make our way to the next checkpoint. I am happy to report that my concentration is improving, and I am getting better at instantly catching the desired behavior. After all, that’s what I am being trained to do.

When all the work and recreational period that follows has been completed, we return and the help is allowed to eat. (The help would be me, of course.) After breakfast, I prepare more puppy treats including cooking more chicken if necessary, then slice yummy chicken into pea-sized bits and tempting cheese into similar sized bits. By the time I finish all my kitchen chores and get properly dressed, it is usually time for another walk.

Fortunately, Galen is also being trained. He got the “sit” command down in nothing flat. “Piece of cake” he seemed to beam. Of course, I admit that occasionally, when stumped, he sits because he’s pretty darned sure that putting his fanny on the ground makes us happy; but, for the most part, he is getting his cues straight. “Down” as in put the belly on the ground, was more challenging. For both of us. He didn’t get it at first and getting lower to the ground to cue him did my back no good at all. Now, I don’t have to get as close to the ground and I certainly look forward to reaching the stage where I can give the signal from a full standing position. “Watch me” is coming along nicely. Yes, I freely admit that, at this stage, the pup has his eye on the treat next to my eye, but we are getting there.

The biggest advance in my education is successfully coping when Galen gets totally nuts and believe me this dog adds new dimensions to the adjectives “excited” and “stubborn”. I have learned that turning my back and becoming totally bored with the ball of furry resistance on the other end of the leash produces calm. In the beginning he would occasionally plant that cute little fanny on the grass giving me the “Make me follow" look or throw himself against the end of the leash in a dramatic tantrum. I learned to stop, show him my back, and take time to admire the clouds, trees in the distance, or the tall grass waving in the breeze. Soon, a nose would touch the back of my leg and a somewhat contrite Galen, would look up as though to suggest politely that if I might be interested in a walk, he would be most happy to follow. There is little if any resistance now and those result in the briefest of pauses. On those occasions, the moment the furry creature has come around, off we go for more of our duties and just plain fun.