Through the Searles Valley 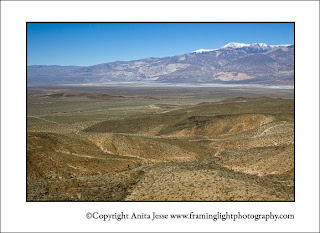 (Click on the thumbnail for the bigger, better version)
Chasing Sunshine - Day 1 on the way to Death Valley

Down, down, down, through the first valley, then up and up, over one pass down the length of another valley and, finally up over another pass, then down once more. A roller coaster of elevations from 4000 feet to 1000, back up to 3000 and down to 1000 again, then up to 5000, and down, ultimately, to minus 236 feet. At one point, we descended a 9% grade. The path from Bear Valley Springs to the furthest point we reached in Death Valley offered infinite variety in scenery. The journey also provided a rigorous workout for the old Tioga's Ford engine, as well as one that finally evoked the christening of our home on wheels.
The first day of chasing sunshine we set out across country headed north-northeast taking back roads that took us through colorful small towns, some of which were nothing more than wide places in the road. The road through Searles Valley took us past Searles, Argus, Trona, and the sign for Ballarat, three miles off to the east. We sailed by the the gravel road that day, but we had plans for Ballarat later.
All the while, we got a better and better look at the Panamint Mountains off to the East. Majestic, still snow covered, and holding the Searles Valley close, they stretched north then west, as far as we could see. They would serve as beacons throughout the trip.

Trona is the largest of the towns in the valley and proud home of the Trona Tornadoes. (By the way, the Tornadoes are the only high school football team to play on a dirt football field in the contiguous United States. The searing heat in the valley and the highly saline soil kills grass.)
I took a liking to Trona while passing through. The town must have more museums per capita than any other west of the Mississipppi and a most impressive listing of churches is proudly displayed via a well-kept sign at roadside. It would appear that the folks in Trona are hard-working, God-fearing people. Maybe, on the other hand, they just need a lot of preaching to. I suspect the former. We noticed, by the way on our return trip, that the parking lot was filled for the Elk’s Club meeting. An active civic group is surely a likely a good sign. 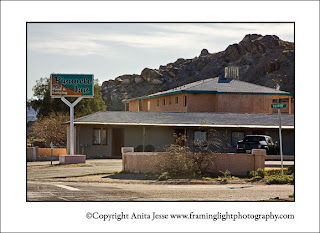 While I was fascinated by Trona and wished we had time to stop, I couldn’t help noticing that the Pinnacle Inn isn’t tempting. Not to bad mouth the good folks of Trona and one of their fine establishments, but The Pinnacle didn’t strike me as a vacation destination. I hate to say it, but when they hold a bowling tourney down in Lorraine, it’s likely that the loser gets a free weekend at The Pinnacle. 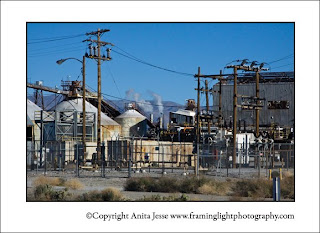 Perhaps on our next trip into Searles Valley I will get to spend half an hour in Trona. For one thing, I want a closer look at Searles Valley Minerals Inc., the sprawling smoke-belching plant here since 1913. Soda ash is processed in that cramped space, and it is the largest firm in the small town. Someday, I also want to see some of those churches. Nice meeting you Trona.
Late in the afternoon, when we finally made it to the top of the pass that connects the Searles and Panamint Valleys, we were greeted by the view at the top of this post—a peek at the 65 mile basin that is Panamint Valley with the mighty Panamints in the background. There was a pause for the engine to cool down and for us to stare—mostly silent, in awe of the landscape ahead of us.
Posted by Anita Jesse at Tuesday, March 16, 2010