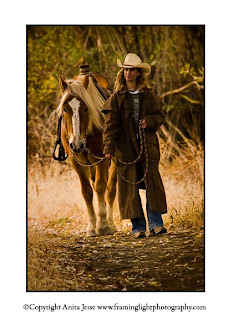 (Click on the thumbnail for the bigger, better version)
You might say that I have been traveling the last couple of weeks. But, in my case, not the sort of traveling that probably first came to mind. Yes, there have been the usual one-day errand-runs to Bakersfield and Los Angeles—journeys to the city to stock up on on various and sundry types of supplies—but, most of my time has been spent on excursions of another type altogether.

The photo here represents one of those departures. Back when I was living in Los Angeles, I occasionally took on assignments to photograph people and their horses. This wasn’t a regular thing, since I was working full-time running the acting studio; but, it was quite satisfying when I found someone I really wanted to work with. With so much to photograph here in Bear Valley Springs, I had thought that I wouldn’t miss that part of my photography. I reasoned that with our horses never really out of sight here, I would be more than happy just taking pictures of them and I wouldn't need to make pictures of other people and their horses.

I was wrong. It turns out that I miss recording those stories about that relationship between human and animal. Finally, I dipped a toe in the water, and now that I have done a couple of these sessions, I am eager to further explore the possibilities.

And, yes, I continue to spend huge chunks of my waking hours in an exploration of lighting with speedlights. Talk about fun! I am having a blast. My test photos are not something I want to post on my blog—or anywhere else for that matter. I now own North Amerca’s most photographed teddy bear, and I have taken pictures of The Husband that I could publish only if I didn’t value my life. Nevertheless, I am learning and no longer intimidated by terms such as ETTL, channels, groups, and ratios. Moreover, shocking as it is to me, sections of my 580EX flash are beginning to make sense to me.

Anyone who has read more than five posts on my blog has picked up on the fact that I am more than a little obsessive, somewhat disturbingly moody, and totally unreliable. Consistency and steadiness with communication are not part of my profile. Therefore, I’m confident that most folks realized when I disappeared that Anita was simply off on some tangent again. I always feel a little guilty about not at least posting a note to all my blog-world friends whose fellowship I so much enjoy. At the very least, I could have put up some type of note—at least “Gone fishing” or something, but the fog had invaded my brain and, as is often the case in these situations, I was totally tongue-tied.
Posted by Anita Jesse at Thursday, December 10, 2009