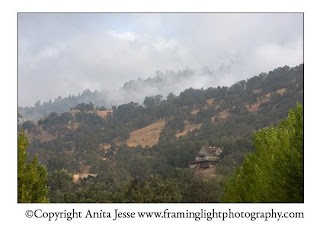 (Click on the thumbnail to view larger image)
[I have no idea why, but lately posting on Blogger seems to be a matter of playing chicken with a photo. Periodically, the shot that ends up on this site bears almost no resemlance whatever to the image at the main gallery. I thought I had a solution, at one point; but, today that didn't work, and I have officially given up on this one. Click on the link, please, and ignore the mess above.]
Since fog seems to be a theme in my corner of the blogosphere, I decided to join the fun. I don’t have much experience yet (note the optimism with that qualifier) shooting in fog and frankly, have never been a huge fan of fog—especially in long and large doses. (Once when I spent a few days in San Francisco, I made a note to never consider living there. I was certain that I would go stir-crazy with so little sunshine.) However, it seems there are a great number of changes afoot.

This morning started out busy, since The Husband was getting off to Los Angeles for chores down there. But, from the moment my feet hit the floor at 6:30, I had been admiring the fog hanging over the Tehachapis and wishing I could get out the camera and experiment instead. As soon as the oatmeal was done, I stole a moment to see what was going on at some of my favorite photoblogs, only to find both Paul Butzi and Paul Lester talking about fog! Well at that point, fog won the tug of war, and The Husband was on his own.

I was already too late to get to a point where I would find any interesting foreground for my shots as the fog was burning off fast, so I settled for shooting from the backyard. I wasn’t satisfied with any of my photographs (the shot above just shows I did get out and there really was fog here), but I had a wonderful time. Moreover, I have decided that fog may not be so bad after all.

Perhaps another fog is lifting.
Posted by Anita Jesse at Friday, October 03, 2008