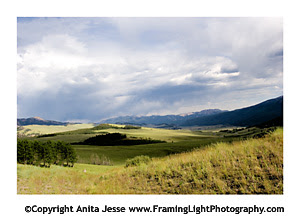 (Click on the thumbnail to enlarge the image)
When we take one of our road trips, I do quite a bit of what I am starting to call "Drive-by Photography". (The picture above was taken on the way home from our Eastern Sierra trip.) Since my husband is driving on those trips, I don't have to pay attention to traffic while I shoot. I shoot outside the car window, or sometimes through the windshield. Granted most of the shots are throwaways, but every so often there is one I am glad I shot.
A short while back I posted another one of my shots taken through the window and got back a fun response from a viewer who linked to his own examples of this type of madcap shooting. Apparently, Beau Harbin has done his share of photographing scenes while traveling down the highway. Now, I have learned that some of those wonderful images at Doug Stockdale's site were taken from a moving vehicle. Hmmm. I think I will apologize less now for this style shooting and consider myself having joined a growing movement. On a more serious note, Doug Stockdale has a unique style and his work stays with you. (As a bonus, he is a master of shooting from a moving vehicle.) And, speaking of work that stays with you, check out the beautiful black and white titled "Fingers", at Paul Maxim's site. Especially if you are a cloud person like me, you will be hopelessly smitten. (By the way, this photograph was taken from a totally safe and sane position according to Paul's post.)
Posted by Anita Jesse at Friday, October 19, 2007