One my favorite things about this journey with my camera is the continuing high of learning as I discover more about photography and, simultaneously, explore the creative process. For several decades, I have been teaching acting and writing about the acting process. Part of my fascination with my work has always been the endless exploration of the nature of creativity. Tuesday night, I had one of those painful and confusing, yet invaluable learning experiences that one hopes never to forget.

For a few days, I had watched the progress of the night-blooming cactus ensconced in its massive pot outside our backdoor and waited for one of two buds to open. Timing is critical, since this amazing white flower opens when night falls and begins to close with the light of dawn, never to open again. The splendid celebration lasts one glorious summer night, then it’s gone forever. I had hoped to do something different the next time I had the good fortune to participate in the one-night fling of the pungent white blossom. Late Tuesday, I checked the ripest bud and I was convinced that it would thwart me by blooming on a night when I would be unavailable to shoot. At about 10:30pm while I sat robotically processing images, because I was too tired to get up and get ready for bed ,my husband announced, “Your cactus has bloomed.” Rather than relishing what should have been welcome news, I was almost paralyzed by disappointment. Why at a time when I was already too tired to move? Why had I not checked immediately after the sun went down? I began to stumble about looking for the lights, flash, (the batteries were dead, of course), off-camera cord, reflector, tripod, and—most of all—some energy and serious motivation. I swore at myself—again—for not having reorganized gear since returning from the Eastern Sierras trip and for never having dealt with buying a reflector stand and some type of light stands. By the time I finally had my gear set up (something that, ideally, would have been completed a full half-hour before the flower opened), I couldn’t fully connect with my original purpose for shooting.

To make matters worse, for some crazy reason (exhaustion I suppose) the dull logical part of my brain took over, and I struggled against dreadful obstacles to light every petal evenly, get all the elements in focus and just finish the wretched job. All this with no end of frustration. I had failed to check my CF card and filled it with two test shots. Another delay. There was no way on earth for me to turn the pot toward a light source. The plant is at least ten feet tall and I have no idea how much the pot weighs, but I wasn’t going to find out. I experimented with off-camera flash trying to solve the seemingly hopeless lighting situation. Every shot looked over-exposed, under-exposed, or out of focus. The flash cord was annoyingly short. I didn’t have enough hands to do everything. Everything that could go wrong did go wrong. Once, I smashed my right index finger between the camera and tripods, because in my cloud of fatigue I loosened the wrong knob. Yet another reason to give up. The pine tree was in the way on one side. A second cactus dared me to move too far in another direction. I wasn’t prepared and I began seriously trying to wriggle out of the shoot. I just wanted to go to bed! Nevertheless, some stubborn part of me knew I had to follow through on my resolution to catch the next “grand opening” and to move beyond the basic “catalogue shots” I had gotten of a blossom last summer.

After fumbling through what was never fun for one moment, I finally felt I had satisfied the inner demons who had demanded that I take the photographs and fell into bed about 11:30pm tired, dejected, and certain that the entire procedure had been a waste of time and energy.

The next morning, I was in no mood to view the results of previous night’s debacle. Why ruin a perfectly good morning with a reminder that I have along way to grow? However, a kind of morbid curiosity ultimately won out. Why not end the misery and put it behind me, I reasoned? Lo and behold, when I unenthusiastically opened one lone frame in Lightroom, I was shocked to see that my subconscious had somehow managed to take over and there before me was an image that looked very much like what I had imagined two weeks ago. Sure enough, viewing another three images demonstrated that—almost in spite of myself—I had managed to get some elements in focus, not everything was over or under exposed and I had succeeded in seeing the night-blooming cereus in a slightly different way this time. While my intellect had served mostly as an impediment, my subconscious—like it or not—had obstinately persisted with the assignment I had given myself. Self-discipline is a wonderful thing. Sometimes, years of training won’t let you stop or get in the way even when you are determined to throw in the towel. Sometimes it leads you by the nose regardless of how much you squirm and squeal.

The experience was exhausting and humbling. Still, I wouldn’t take anything for the beauty and inspiration of the lesson re-learned. Trust the creative process—a concept I preach to my students and strive to live by. I read, recently, that John Houston the film director once said some of the best moments in his films were the results of accidents. While my product from Tuesday night’s exercise in frustration and discovery may not fall into a class with Houston’s iconic work, the lesson reflects his keen and honest observation. While there can be no doubt that Houston knew his craft, and committed always to full preparation in anticipation of nothing short of excellence, he knew that, in the execution, one must let go and trust the unconscious—the creative voice/vision—to function as the brilliant “heat-seeking device” it is and allow it to find its target. Most of all, we must embrace the unexpected. We must abandon once-and-for-all the desire for full conscious control over every element of the creative process. In a nutshell: never stop learning; do everything necessary to prepare; and then, in the moment of truth, Get. Out. Of. The. Way.

I hope you enjoy the night-blooming cereus. 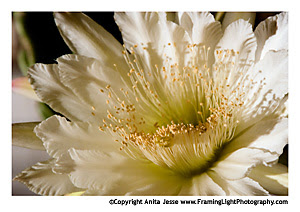 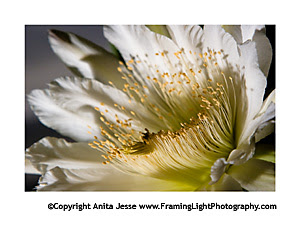 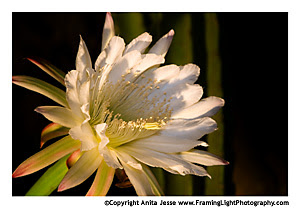 (Click on the thumbnails to view larger image)
Posted by Anita Jesse at Friday, September 07, 2007